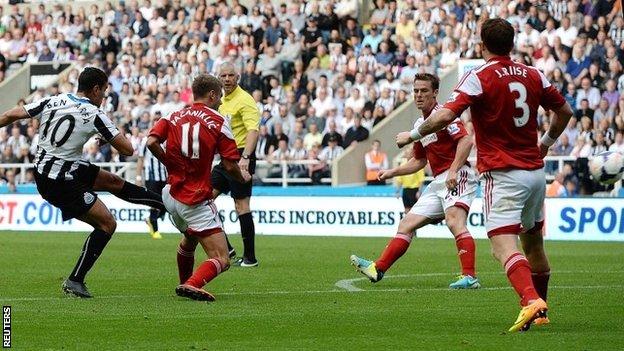 Hatem Ben Arfa's late strike against Fulham ended Newcastle's run of four home games without a goal and secured their first league win of the season.

Both teams struggled early on but the hosts improved after the hour mark when Yohan Cabaye and Loic Remy came on and Papiss Cisse headed against the bar.

Adel Taarabt's effort was saved by Tim Krul in an isolated Fulham attack.

But Ben Arfa won it with four minutes left, cutting in from the right and curling superbly into the top corner.

Yoan Gouffran, another second-half replacement, and Cabaye almost added goals toward the end but were both denied by Fulham goalkeeper David Stockdale.

It was a welcome late flurry from the hosts, who for the majority of the game lacked the required urgency to break down a Fulham side which looked intent on gaining a point.

And it will be a huge relief for Newcastle boss Alan Pardew, whose side struggled last season and finished fifth from bottom in the Premier League.

Pardew has admitted it has been a hard time for the club after recruiting only Remy on loan and being unsettled by Arsenal's £10m bid for Cabaye on the eve of their first game of the season - a 4-0 thumping by Manchester City.

Following that defeat, this was Newcastle's third consecutive clean sheet.

Cabaye came on to a mixed reception after refusing to play against West Ham last weekend, but he played his part in injecting his side with some much-needed energy and the Newcastle fans will hope that the club can hang onto him beyond the transfer window which shuts on Monday.

Coming into the game, the Magpies' goal drought stretched back to 7 April when they beat Fulham 1-0 at St James' Park thanks to an injury-time Cisse strike.

Yet the Senegalese striker looked short of confidence in front of goal and much of Newcastle's fortunes in the first half were summed up when Fabricio Coloccini's fifth-minute header from a corner was blocked by team-mate Cisse.

The hosts had lots of possession and plenty of good build-up play but they were missing the required dynamism in the final third, and Cisse spurned a trio of half-decent chances.

Fulham, who handed Darren Bent his first start, rarely troubled the Newcastle goal, though the on-loan Aston Villa man did come close to getting on the end of Sascha Riether's near-post cross.

The striker also gave Tim Krul a worry with a second-half header, while Bryan Ruiz's free-kick was also well-stopped by the Dutch goalkeeper.

Once Newcastle introduced their firepower from the bench though, they took control of the game and Ben Arfa's wonderful goal was worthy of winning any contest.