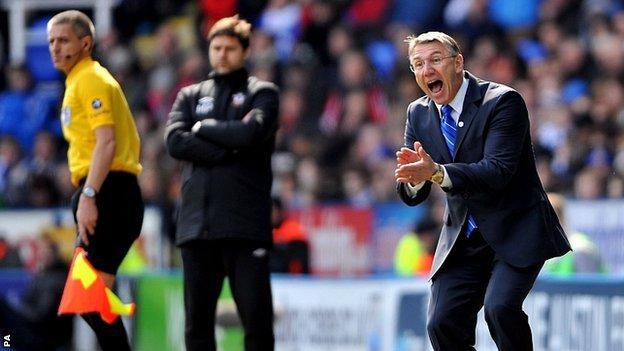 Reading boss Nigel Adkins says the club are still hopeful of adding two new signings before the end of the month.

The Royals have so far brought in Royston Drenthe,Wayne Bridge and Danny Williams this summer.

Werder Bremen striker Joseph Akpala, 26, has been training with the club this week and Adkins confirmed the club continue to monitor the Nigerian.

"Before the window closes, we are endeavouring to bring a couple more in," Adkins told BBC Radio Berkshire.

Akpala has been told he can leave his German club and Adkins said: "He has come and trained which is important we've had a good look at him.

Adkins dismissed rumours linking the Royals with Blackpool winger Tom Ince, whose father Paul is the Lancashire club's manager, but added some of the other names mentioned recently were more accurate.

"He is going to leave Blackpool for a Premier League club," he added.

"Like many football clubs now it'll start to hot up a little bit, speculation which has been miles wide of the mark in a lot of situations, which I think everyone is well aware of now,

"One or two [names] might be closer to home - we'd like to try and strengthen the group that we've got and we've still got a period of time to go and do that."