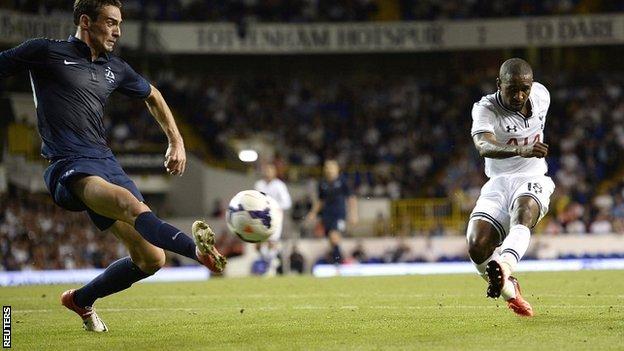 Jermain Defoe scored twice as Tottenham cruised through to the Europa League group stage after beating Dinamo Tbilisi in the play-off second leg.

Having beaten the Georgian side 5-0 last week, Spurs once again showed the gulf between the two sides.

Defoe scored his first after 40 minutes by firing in Lewis Holtby's diagonal pass and then converted Gylfi Sigurdsson's cross before half-time.

Holtby then smashed in his first Spurs goal from 25 yards after 69 minutes.

Spurs will join Valencia, Lyon, Lazio, Fiorentina, Swansea and Wigan in the Europa League draw, to be held in Monaco at 11:45 BST on Friday.

And after the addition of record £26m striker Roberto Soldado, who has scored four goals in three games since joining Spurs, Defoe used a one-sided affair to make his mark on his first start of the season.

The England striker was used intermittently towards the end of last term, but with Roma forward Erik Lamela also set to join Tottenham, Defoe underlined he can play his part in his side's attempt to win four trophies this season.

Dinamo, without their injured top scorer Xisco, did not muster a shot on goal until after the break when Elguja Grigalashvili's effort was comfortably gathered by Spurs goalkeeper Brad Friedel.

But the match gave important playing time to some of Tottenham's growing squad.

Gareth Bale's impending move to Real Madrid for a world-record £86m has seen a summer of big spending at White Hart Lane with Steaua Bucharest centre-back Vlad Chiriches and Lamela the latest players set to be signed by Spurs boss Andre Villas-Boas. The club are also being linked with Ajax midfielder Christian Eriksen.

Despite being beaten by Spurs, Dinamo Tbilisi could still qualify for the group stages. Uefa is holding a random draw at 08:00 BST on Friday for all qualifying play-off losers to decide who replaces Fenerbahce. The Turkish side have been banned for two years for match fixing

So first starts of the season for Defoe, Friedel, Holtby, Sandro and Tom Carroll were no doubt welcome for the players ahead of some fierce competition for starting places.

Mindful of Sunday's Premier League game against Arsenal, Villas-Boas made eight changes to the side which beat Swansea last weekend, and the team took time to find their cutting edge.

But after Defoe shot wide early on, he found his range before the break with a clever run in from the right before taking Holtby's pass and blasting into the bottom corner.

Six minutes later he scored an easy second, tapping in from two yards from Sigurdsson's centre after neat skill by Kyle Walker.

Villas-Boas, who won the Europa League with Porto in 2011, withdrew Walker and Andros Townsend in the second period.

And the remaining players were intent on trying to get on the scoresheet against such weak opposition, with Sigurdsson crashing a shot against the bar just after the hour.

Patrick Vouho had an isolated effort for the visitors when he headed wide from a free-kick.

But Holtby proved more accurate when he drove in off the crossbar.

"He's doing extremely well, he has in him the goalscoring ability, and he proved it once again tonight.

"We are trying to build a strong team with strong players and everybody has to compete for their place. Does he have a future? Yeah, we always want to make the team stronger so players who are in the top 10 of Tottenham's all-time scorers can only be good for the club."