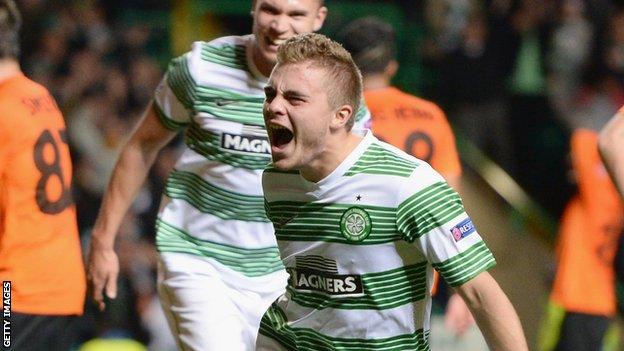 It took until time added on in the first half for Celtic to reduce the 2-0 first-leg deficit through a superb long-range strike from Kris Commons.

But Georgios Samaras then levelled the tie three minutes after the break.

Both sides struck the crossbar before Anthony Stokes set up Forrest to fire home for a deserved, if nervy, win.

The strike sent a delirious Neil Lennon sprinting along the touchline to join in the celebrations with his players, as Celtic Park erupted in noise in front of a watching Nir Biton, the Israeli star set to join on a four-year deal this week.

"That was the greatest thing I've ever done in football," said Lennon.

"The last three months were in preparation for this. We lost three very important players [Victor Wanyama, Gary Hooper and Kelvin Wilson] and it has been difficult to replace them. Coming from 2-0 down tonight just makes the players all the more remarkable.

"They were wonderful, absolutely wonderful."

Victory took Celtic, who reached the last 16 last season, into the group stages for the second year running and ended the Kazakhstan champions' hopes of being the first side from their country to go beyond the qualifiers.

Lennon had ditched the central defensive pairing of Virgil van Dijk and Steven Mouyokolo that was much criticised in Astana, along with left-back Emilio Izaguirre.

Mikael Lustig moved inside from right-back to partner Efe Ambrose, with Lennon looking for Adam Matthews and Charlie Mulgrew to add attacking flair from the flanks.

The result was instant pressure on the Shakhter defence and goalkeeper Alexandr Mokin superbly palmed the ball over as Lustig rose to head powerfully at goal following a cross from Kris Commons.

Forrest had a powerful drive from the edge of the box turned over by Mokin, who then pushed clear off the line from a header by fit-again Stokes.

The goalkeeper was having an inspired night and, even when he looked to be caught out by Commons' shot-come-cross, he managed to fly across his line to turn the free-kick clear.

Shakhter were putting bodies on the line in a desperate but increasingly effective effort to deny Celtic clear-cut chances, while displaying a growing confidence that they could hurt their hosts.

The visitors had shown their prowess at long throws in the first leg and the much-changed home defence were finding the set-pieces increasingly troublesome.

That frustration boiled over with Celtic captain Scott Brown, back to his hot-headed worst, aiming a stamp at Gediminas Vicius that would probably have received a red card had it been spotted by the officials.

However, Celtic continued to probe and, just when Shakhter looked like surviving until half-time, Commons gathered from Samaras and sent a powerful shot past Mokin from 25 yards.

Celtic's momentum continued after the break and they were level in the tie when Lustig's mis-hit shot found Samaras and the Greek forward beat Mokin from 12 yards.

Shakhter responded but when Forster could only parry Andrei Finonchenko's 22-yard drive straight to Sergei Khizhnichenko in front of goal, the striker was foiled by an offside flag as well as his poor control.

Stokes ought to have put Celtic ahead on aggregate but somehow volleyed against the crossbar after a Forrest cross found him clear at the back post.

Celtic were then fortunate to escape at the other end when Nikola Vasiljevic's header was cleared off the line by Matthews and, from another long throw, Khizhnichenko flicked the ball against the crossbar.

Just when a toiling Forrest looked poised to be substituted and the tie seemed destined for extra-time, Stokes weaved his way into the penalty box before turning the ball into the path of the winger to fire in off the underside of the bar.