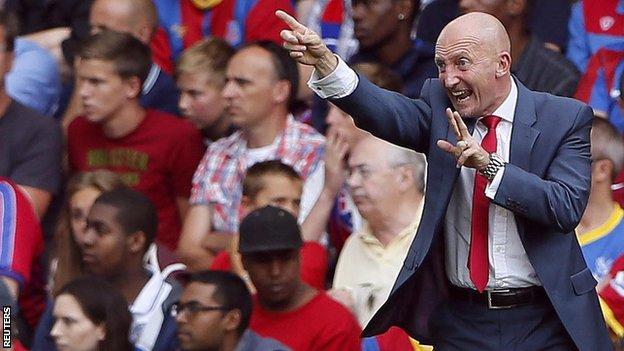 Crystal Palace boss Ian Holloway will serve a two-match touchline ban after accepting charges of improper conduct and bringing the game into disrepute.

The Football Association confirmed he would not contest the charges over comments he made following his side's 1-0 defeat by Tottenham on 18 August.

Holloway, who won promotion with Palace in May, has also been fined £18,000.

The Palace manager also argued that he received unfair treatment from referees.

In a statement, the FA said Holloway had been fined £10,000 for his language and behaviour in or around the match officials' dressing room after the game, and £8,000 for post-match comments questioning the referee's integrity.

The statement read: "Ian Holloway will serve a two-match touchline suspension with immediate effect after Crystal Palace notified the FA that they would not be appealing the sanction."

He will be banned from the touchline for the trip to Premier League champions Manchester United on 14 September and the following weekend's home game against Swansea.

Holloway argued the officials missed a foul against Palace in the build-up to Tottenham's penalty being awarded.

The match marked the manager's first game in the Premier League since being relegated with Blackpool on the final day of the 2010-11 season.

And in his post-match interview, the 50-year-old told BBC Sport: "It's going to be a long, hard season for me with these people [referees].

"I had this with Blackpool. Certain clubs get fouls and others don't."