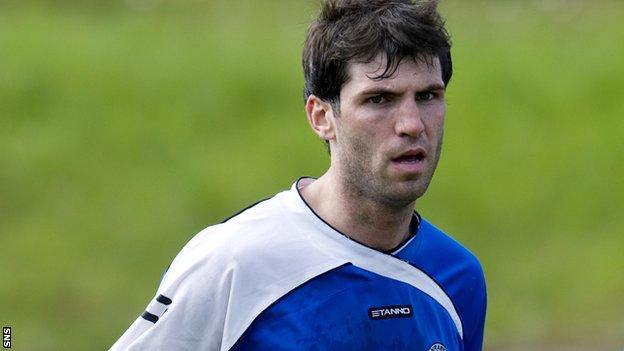 Martin Grehan's winner gave Stranraer a brilliant victory against Premiership side Ross County in the League Cup second round tie at Stair Park.

Richie Brittain put County ahead from the spot but Sean Winter levelled for Stranraer in the second half.

The hosts went ahead when Chris Aitken scored a penalty but County immediately pegged them back through Orhan Mustafi's close-range finish.

But Grehan latched onto a quickly taken set-piece to score the deciding goal.

Therefore the return journey of Ross County's 532 mile round trip will now feel even longer.

Two leagues separate these sides but the opening exchanges did not give that impression.

Stranraer's good pressing and forward passing meant they spent much of the first 15 minutes putting lots of pressure on the County defence.

Grehan's right-foot shot was saved by the feet of visiting goalkeeper Mark Brown, while Blues winger Mark Corcoran was also making a nuisance of himself.

County's Ivan Sproule did his best to make inroads to Stranraer's back-line, but Derek Adams' men could not create anything for home goalkeeper David Mitchell to save.

However the Highlanders were handed an opportunity on a plate on the stroke of half-time.

Stranraer midfielder Grant Gallagher fouled Grant Munro at a corner and referee Stephen Finnie pointed to the spot for what seemed a soft penalty.

Brittain stepped up to net his third goal in two games as Stranraer manager Stevie Aitken expressed his anger at the penalty award.

Despite that, the Blues opened the second half in as positively a manner as they had the first - Chris Aitken's powerful shot dealt with by Brown.

And Stranraer soon got what they deserved when a long diagonal ball was flicked into the path of Winter to side-foot his second of the season past Brown.

It got even better for Stevie Aitken's side when County's Mihael Kovacevic fouled Winter in the box to earn a penalty which the manager's brother, Chris Aitken, converted.

However, the eight travelling fans from Dingwall had an equaliser to cheer when substitute Mustafi scrambled home in a crowded goal-mouth.

The scoring did not stop there, though, and Grehan - a thorn in the side of the visitors all night - got on the end of a quick free-kick on a flash and made no mistake with his finish.