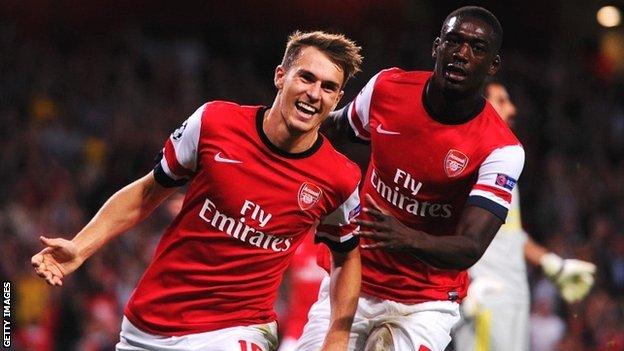 Aaron Ramsey scored twice as Arsenal recorded a comfortable victory over Fenerbahce to reach the Champions League for the 16th consecutive year.

The Turkish visitors trailed 3-0 after the first leg of the play-off and went further behind when Ramsey finished from close range after Lukas Podolski's through ball was deflected to him.

But Ramsey grabbed a second when he volleyed in Kieran Gibbs' cross.

Theo Walcott hit the crossbar with a free-kick as Arsenal strolled through, with the only concern for boss Arsene Wenger a hamstring injury which will keep Podolski out for three weeks.

England midfielder Jack Wilshere also looked uncomfortable after receiving a late kick on the ankle but finished the game.

Otherwise, once Ramsey added to his goal in the first leg, it was a relatively straightforward evening in front of an under-capacity crowd at the Emirates Stadium.

Following their opening-day defeat by Aston Villa, this was Arsenal's third successive victory and, ahead of hosting north London rivals Tottenham on Sunday, it will have injected fresh confidence into an occasionally fragile side.

European governing body Uefa may also breathe a sigh of relief since the result avoided a potentially awkward scenario where Fenerbahce could have progressed despite facing the prospect of a two-year European ban after being found guilty of match-fixing.

Their appeal will be heard by the Court of Arbitration for Sport on Wednesday.

History weighed against the visitors, with Arsenal only twice suffering European defeats by three goals or more in the last 50 years, and Fenerbahce scoring just three times in eight trips to England.

However, they went close to opening the scoring when Bacaray Sagna's attempted clearance was deflected towards his own goal and forced Szczesny into a save.

Ramsey put the Gunners in greater control when he profited from Caner Erkin's sliding clearance after Podolski attempted to find Walcott.

Arsenal have a 100% record in Champions League play-off ties, winning 12 games out of 12

Welshman Ramsey, who struggled for form for parts of last season, has made an energetic start to this campaign and impressed alongside Wilshere and Santi Cazorla in the heart of Arsenal's midfield.

The trio were at the heart of some early, crisp passing and set up chances for Walcott and Olivier Giroud, while Cazorla was denied by a fine save as Fenerbahce keeper Volkan Demirel kept the game, if not the tie, in the balance.

The visitors went close to equalising on the night before the break when Nigerian Emenike bore down on goal after giving Sagna the slip, but Szczesny pulled off a superb stop.

Eighteen minutes from the end, Ramsey finished off a fine move down the left, volleying into the bottom corner to ensure Arsenal's name will be in the Champions League draw on Thursday once again.