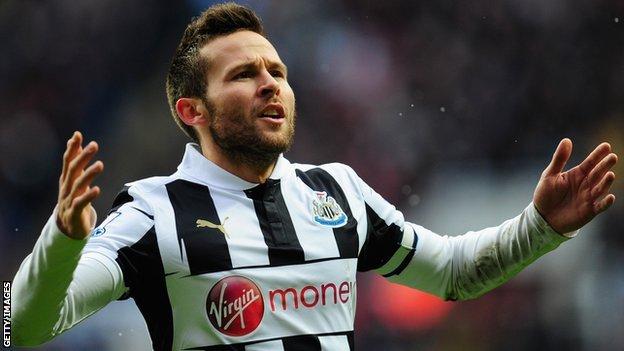 Arsenal have made a bid of about £10m for Newcastle midfielder Yohan Cabaye.

The Magpies are yet to formally reject the offer for the 27-year-old France international but they view it as derisory and plan to turn it down.

Cabaye travelled with Newcastle's squad before but returned home as he was not deemed to be in the right frame of mind to play.

Arsenal, who lost their opening game of the season 3-1 at home to Aston Villa, have declined to comment but are looking to reinforce their midfield.

The Gunners have been hit by injuries to Mikel Arteta and Abou Diaby.

Newcastle have no appetite to sell Cabaye, but will not rule out the sale of any player following their experience with Andy Carroll in 2011.

Having insisted the striker was not for sale at any price, they sold him to Liverpool for £35m on the last day of the January transfer window.

Speaking to BBC Radio 5 live ahead of their Premier League game against City, Newcastle manager Alan Pardew said he did not believe that Arsenal's bid was "acceptable".

"The rights or wrongs of that bid I will leave others to think about, but I know what I think of it," he added.

After the match he explained that the timing, as well as the size, of Arsenal's bid had upset the Tynesiders.

"To bid on the eve of a game was not necessary. They could have bid when this game was over and it would not have been any further down the line," he stated before agreeing that Cabaye's "head had been messed with".

Cabaye has made 73 appearances for the club since joining from Lille in June 2011 and made his top-flight debut against the Gunners in a goalless draw.

Following the home defeat by Villa, the transfer policy of the Gunners and manager Arsene Wenger have come in for criticism from the Arsenal Supporters' Trust (AST).

Arsenal play the first leg of their Champions League group stage play-off against Fenerbahce in Turkey on Wednesday.