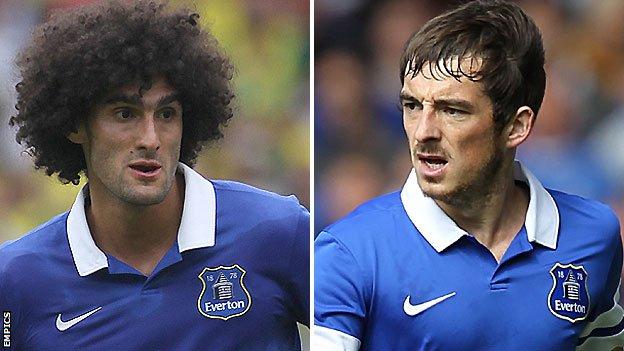 United had a £12m bid for left-back Baines knocked back in June but have come back with the same offer.

"Those bids were rejected out of hand as derisory and insulting," said director of communications Alan Myers.

The offers came late last week and Myers added: "The club did not make public these details as it was vital Roberto Martinez's preparations for the opening game of the Premier League season were not disrupted in any way."

Both players started in Everton's 2-2 draw with Norwich on Saturday.

After so far failing in his pursuit of Barcelona's Cesc Fabregas, Moyes has put his two former players back among his top summer transfer targets.

The renewed attempt to prise England defender Baines, 28, away from Goodison Park was greeted with anger and surprise by Everton, who rejected the £12m offer out of hand.

"Everton sell very expensively. That's what we do.

"We don't sell cheap because that is why he is on a five-year deal and the chairman looks after the players and gives them what he can. So he is not for sale."

Read the full story in the Liverpool Echo

United's offer for Belgium midfielder Fellaini has caused particular frustration at Everton as Moyes was manager when the expired release clause was inserted into the 25-year-old's contract.

Everton's new manager Roberto Martinez expressed his delight when the Fellaini deadline had passed - so to receive an offer well below that figure from the man he succeeded will not impress owner Bill Kenwright.

While it remains to be seen whether United will return with improved offers, they may now find Everton's mood more entrenched.

Moyes brought both players to Everton, signing Baines from Wigan for £6m in August 2007 and Fellaini for a club record £15m from Standard Liege in September 2008.

1774 comments
Back to top
unknown