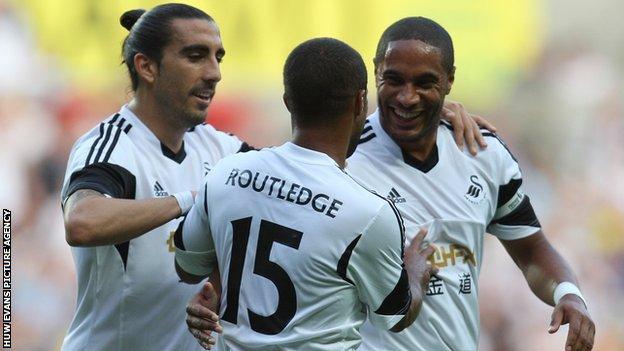 Wayne Routledge scored twice as Swansea thrashed Petrolul Ploiesti to all but seal their place in the group stage of the Europa League.

The winger curled in Swansea's first against the Romanians, Michu poked home the second and Routledge then scored a header in an excellent first-half show.

Ploiesti goalkeeper Peterson Pecanha put the ball into his own net from Wilfried Bony's shot.

Alejandro Pozuelo chipped in a fifth, before Gheorghe Grozav's consolation.

Swansea's healthy advantage could have been even bigger, as Routledge shot over the bar with his hat-trick begging while Bony hit the side-netting and the crossbar.

The Welsh side must still negotiate next Thursday's trip to Romania, but with a four-goal cushion they should be in the hat when the draw for the group stage is made on 30 August.

Thursday's display followed the previous round's 4-0 home leg win over Malmo, and surely no team will relish being pitted against Michael Laudrup's side.

Michael Laudrup and the making of Ploiesti boss Cosmin Contra

Despite being sandwiched between two big Premier League games - the season-opening loss to Manchester United and Sunday's trip to Tottenham - the Swansea manager picked a strong side for the match against Petrolul.

Neil Taylor came in at left-back for Wales international colleague Ben Davies while Jose Canas dropped to the bench, allowing Bony to lead the attack.

Ploiesti had previously knocked out Dutch side Vitesse Arnhem but Swansea quickly took the game by the scruff of the neck.

Routledge had already ruffled the Ploiesti defence with his pace before the little winger grabbed a deserved opening goal.

Jonjo Shelvey took a quick free-kick on the right that Michu and Ashley Williams allowed to run past them, before Routledge smashed home via a deflection off Ovidiu Hoban.

Shelvey, a £5m buy from Liverpool, was the catalyst for the second, crossing deep from the left to find Pablo Hernandez lurking on the back post.

Ploiesti goalkeeper Pecanha made the stop but could only parry it to Michu, who side-footed into the net from two yards.

The Spaniard demonstrated another facet of his game for Swansea's third goal, tracking back to win possession with a sliding tackle.

The ball was swept out to Hernandez on the right and his deep cross found Routledge arriving to send a flying header into the net.

Michel Vorm had been a virtual spectator in the Swansea goal, with one speculative long-range shot from Grozav the sum of Ploiesti's threat.

The second half soon settled into another wave of Swansea attacks and it was little surprise when a fourth goal arrived.

The dynamic Routledge released Michu down the left channel and his cross was met by Bony, whose shot was half-stopped by Pecanha before the unfortunate keeper helped the ball into his own net with a stray elbow.

Pozuelo, just as he had against Malmo at the Liberty Stadium, came off the bench to add extra gloss to the scoreline, combining with Michu before chipping elegantly over Pecanha.

Grozav's spectacular late bicycle-kick, taking his tally to six in this campaign, gave Ploiesti something to take home but the Romanians need an incredible performance if they are to turn the tie around.

"I have no explanation for the result. There is a difference between English and Romanian football, but the gap is not that big.

"We have maybe less than a 5% chance of qualifying so I hope in next week's second leg we can show the potential we have.

"I believe in order to play in the Premier League you have to do more than score one goal from an overhead kick."