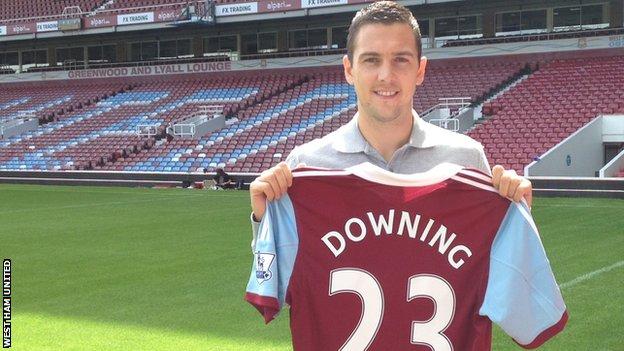 West Ham United have signed England winger Stewart Downing from Liverpool for a fee of about £5m.

The 29-year-old has agreed a four-year contract with Sam Allardyce's side and follows striker Andy Carroll in swapping Anfield for Upton Park.

Downing was signed by Liverpool in a £20m deal from Aston Villa in 2011.

"I'm very excited. It's a great opportunity for me being here, it's a great club and I'm really excited to get going," said Downing.

"I've played a decent few games for Liverpool in pre-season, so there will be no problems on that front."

Brendan Rodgers, who replaced Kenny Dalglish as Liverpool boss, criticised Downing shortly after taking over at Anfield, and picked him at left-back as well as on the wing.

Downing, who has 34 international caps and was part of England's Euro 2012 squad, scored five times in 45 appearances for the Reds in the 2012-13 campaign and registered seven goals in 91 matches for the club overall.

He revealed last December he had been told he could leave Anfield.

Carroll joined Liverpool for £35m in January 2011 but moved to West Ham in a £15m deal earlier this summer following a season on loan with the Hammers.