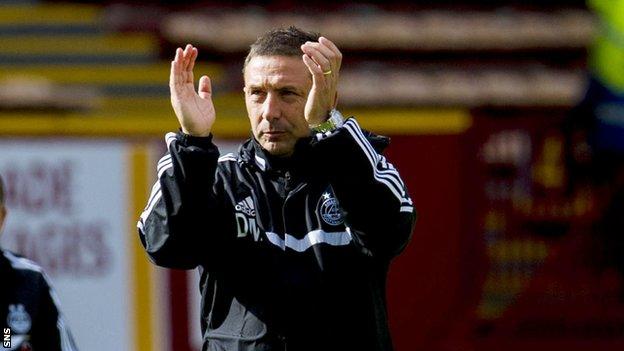 The Dons now sit second in the Premiership, level on points with leaders Inverness.

"Our response to going behind was everything I want from the team," McInnes said.

"At no point did I ever feel we gave up the ghost."

Motherwell's Estonian striker Henri Anier gave the hosts a 39th-second lead but Aberdeen immediately began creating chances rather than feel sorry for themselves.

"I said to [assistant manager] Tony Docherty that we had 89 minutes to do something about it," said McInnes.

"I told the players to keep knocking on the door. I believed that if we got one we'd get another one."

The extremely impressive Peter Pawlett, in for the injured Barry Robson, hit the bar in the first half - as did forward Calvin Zola.

However, the equaliser came when 'Well defender Stephen McManus felled the jinking Jonny Hayes in the second half.

Niall McGinn converted high into the top right corner before Mark Reynolds, a former Motherwell player, bulleted in a header to put the Dons in front.

McGinn later scored another spot-kick after McManus had tangled with Joe Shaughnessy and Reynolds at a corner.

"The two victories we've had now have been done in a different manner so it's pleasing," said McInnes.

"We worked the ball up the pitch well and showed composure and thought to create opportunities."

And the Aberdeen boss reserved a special mention for Pawlett, who troubled the Motherwell defence for much of the game.

"He's a player we've got high hopes for and needs all the encouragement in the world," McInnes added.

"We all know about his pace. He played a real part and especially first-half was very influential."