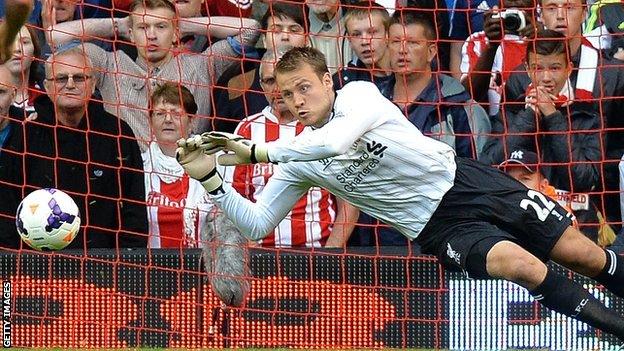 Liverpool secured their first opening-day victory at Anfield since 2001 as goalkeeper Simon Mignolet marked his debut with a dramatic late penalty save to deny Stoke a point.

With Brendan Rodgers's side apparently cruising to their first three points of the season, Daniel Agger inexplicably handled a free-kick in the penalty area with two minutes of the match remaining. Mignolet then produced a brilliant low save to deny Stoke striker Jonathan Walters from the resultant spot-kick, as well as blocking Kenwyne Jones' follow-up.

Daniel Sturridge scored the only goal of the game eight minutes before half-time, drilling a low shot into the bottom right-hand corner of the net.

Liverpool should have won far more comfortably as a host of chances went begging. Kolo Toure and Jordan Henderson hit the woodwork, with Stoke goalkeeper Asmir Begovic in man-of-the-match form.

But the visitors will count themselves unfortunate not to snatch a point. Not only did they waste their late penalty chance, Robert Huth's volley thundered against the crossbar early on.

But ultimately, Liverpool were worth their victory.

"An opening day win for Liverpool thanks to debut goalkeeper Simon Mignolet, but Stoke counterpart Asmir Begovic's man-of-the-match performance at the other end tells the real story. Liverpool should have added to Daniel Sturridge's first-half goal as chances came and went but they were deserved winners."

With the banned Luis Suarez watching with his family in the stands, either side could easily have gone into half-time with more than one goal to their name.

Liverpool dominated, even though Huth hit the crossbar after Mignolet flapped at Glenn Whelan's right-wing cross.

Debutant Iago Aspas and Philippe Coutinho were a pair of nuisances for Stoke, swapping places and eluding markers. Coutinho provided the vision and the craft, Aspas the tireless running, with Sturridge adding an incisiveness Liverpool have often lacked.

The Liverpool striker had a goal correctly ruled out early on, as he strayed marginally offside when heading Steven Gerrard's free-kick into the net. He was denied on three further occasions by the excellence of Begovic and a tremendous goal-line clearance from Stoke debutant Erik Pieters.

Liverpool finally found the breakthrough, with Jordan Henderson squaring the ball to Sturridge 20 yards from goal. The former Chelsea striker steadied himself and let fly with a skidding shot that went between Huth's legs and beat Begovic for pace as it crept into the bottom corner.

Stoke threatened in fits and starts, with Steven N'Zonzi an athletic and intimidating presence in midfield, and the runs of Walters stretching Liverpool on the break. The Ireland striker drew a diving save from Mignolet as half-time approached, while Lucas Leiva cleared another off the line.

Coutinho was the man pulling the strings, however. His quickness of feet and deftness of touch took him away from Stoke defenders time and again. Early in the second half, he curled a shot narrowly wide of the past with only Begovic to beat. Soon after, Henderson linked up with Aspas in the penalty area, only to see his shot tipped onto the post by the Stoke goalkeeper.

Gerrard's 35-yard free-kick was tipped over by Begovic, before the goalkeeper denied Glen Johnson from point-blank range from the resulting corner.

Substitute Charlie Adam almost hit back when he spotted Mignolet off his line from inside his own half and fired in a shot that sent the Liverpool goalkeeper racing backwards to tip the ball over the bar.

As the match ticked into the 88th minute, Agger handled a free-kick and referee Martin Atkinson pointed to the penalty spot to set up Mignolet's heroics.

"Jon Walters gives everything for this club, so nobody in the dressing room will do anything other than pick him up and get him ready for the next game.

"I thought it was going to be a battle and our keeper [Asmir Begovic] kept us in it at times.

"It was a case of staying in the game as long as you can because we are asking them to play a different kind of game and you hope they don't lose confidence, which I don't think they did."