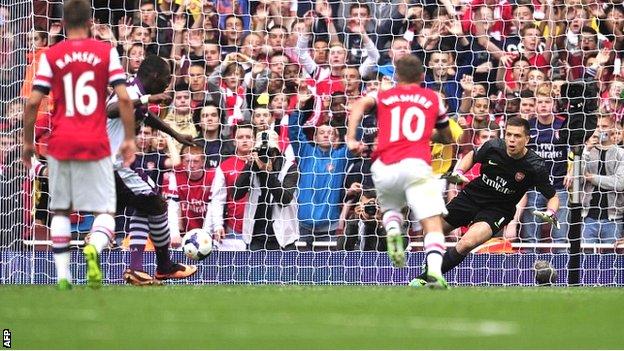 Christian Benteke scored twice and Antonio Luna added a third as Aston Villa came from behind to stun Arsenal at Emirates Stadium on the opening day.

Olivier Giroud opened the scoring, but Benteke headed an equaliser after Wojciech Szczesny saved his penalty.

Benteke controversially put Villa ahead from the spot after a foul by Laurent Koscielny, who was later shown a second yellow card for a mistimed challenge.

"There have been links with some good players so there is an intention to buy them but they need to deliver. It is very worrying. The manager has been good in the transfer window in the past and he needs to bring that back. There are 16 days to go in the window and they are massive for the club. They need to improve the squad, they only just made the Champions League last season and their near neighbours Tottenham have strengthened."

The full-time whistle was greeted with resounding boos from the home crowd, although the arena was near-empty by that point.

Arsenal's only summer signing to date is the free transfer of 20-year-old French striker Yaya Sanogo from Auxerre, and supporters were repeatedly chanting for their club to spend some money.

Arsene Wenger has 16 days to bolster the squad, but his immediate priority will be Wednesday's Champions League play-off first leg at Fenerbahce.

It was Arsenal's first home defeat on the season's opening day in 20 years and only Villa's sixth victory in 28 league trips to the Gunners.

It was a indication of Arsenal's lack of transfer activity that their starting line-up was identical to the side which finished the final match of last season away to Newcastle.

In contrast to Wenger, Paul Lambert has recruited six new faces in the off-season and, although only Luna and Leandro Bacuna featured on this occasion, there was certainly a sense of freshness about their play.

Arguably Lambert's best piece of business has been convincing Benteke to withdraw his transfer request and with the Belgian's importance illustrated one again.

Arsenal dominated the early stages and it told when Jack Wilshere and Tomas Rosicky combined to release Alex Oxlade-Chamberlain on the left. He clipped in a low cross that Giroud converted with a first-time finish.

But the Gunners rarely looked like extending the advantage.

Benteke scored or created 49% of Villa's league goals last season and he got off the mark for this campaign with a close-range header after Szczesny stopped his penalty with a diving save.

The Pole had conceded the spot-kick by upending Gabriel Agbonlahor, who surged through Arsenal's defence.

Villa showed greater urgency after the equaliser, denying Wilshere, Rosicky and Aaron Ramsey the time and space they earlier enjoyed.

An injured Oxlade-Chamberlain was replaced by Santi Cazorla and the Spaniard's arrival gave Arsenal renewed impetus: Giroud going close and Rosicky blazing over when clean through after a slick move.

But such ambition was leaving them exposed at the back and Fabian Delph's drive came back off the post - Hawk-Eye technology was used for the first time in the Premier League to show it had not crossed the line - before Agbonlahor launched the latest of numerous counter-attacks.

Koscielny slid in on Agbonlahor and appeared to touch the ball, but referee Anthony Taylor pointed to the penalty spot.

Benteke sent Szczesny the wrong way and Arsenal's day deteriorated as Koscielny was shown a second yellow card for bringing down Andreas Weimann.

Despite the anger pouring down from the stands, Arsenal composed themselves to press for a leveller and the excellent Brad Guzan foiled Rosicky, before clawing Cazorla's close-ranger shot on to the bar.

Wenger's men were caught out one final time when Andreas Weimann released Luna and he fired past Szczesny at the near post.

"After weathering the early storm we were outstanding, especially on the counter-attack. We were absolutely frightening at times - Agbonlahor produced as good a performance as I've seen in many a year, he was unplayable. We were very strong at the top of the pitch but, all round, Agbonlahor was frightening with his speed. Guzan also produced two world-class saves. We were well worthy of winning the game.

"On the first penalty, Gabby had no right to get there. I've seen them given as red cards but the referee had a good game. The second penalty was a stone-waller. We know the league is really hard, you have to start as well as you can and if you're not 100% you will end up losing games.

"I'm proud of them, they deserve credit. The front three lads are a handful for any team. We're a really young side with enthusiasm and hunger for the game and to do well. There's a long, long way to go, we will have ups and downs, but after that I'm over the moon."