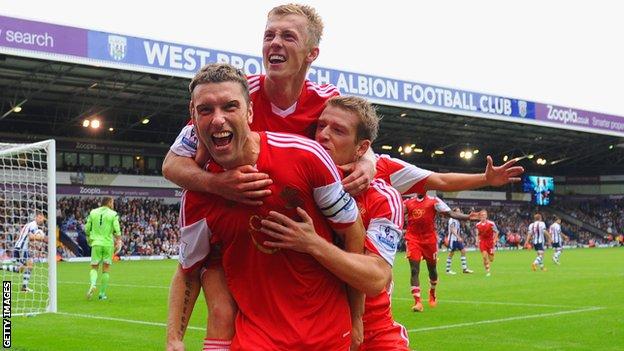 Rickie Lambert followed up a goal on his England debut in midweek by scoring a last-minute winner from the penalty spot for Southampton.

A disappointing game was heading for a goalless draw when West Brom's Youssouf Mulumbu brought down Luke Shaw.

Southampton striker Jay Rodriguez had earlier hit the crossbar in a match of few clear-cut chances at The Hawthorns.

The dramatic finish was in sharp contrast to a scrappy encounter as West Brom struggled to get going despite the presence of new striker Nicolas Anelka.

Although West Brom finished eighth in the Premier League last season, they have now won just one of their last 10 league games.

The Saints were sharp and lively as 18-year-olds Jamie Ward-Prowse and Shaw caught the eye throughout.

Ward-Prowse stung the palms of West Brom goalkeeper Ben Foster from distance in the 20th minute, a rare moment of entertainment in a game that was a poor advert for the top flight.

Southampton captain Adam Lallana found the net from close range in the 33rd minute but it was ruled out for offside, before former Burnley striker Rodriguez struck the woodwork shortly after half-time.

A draw was looming before Mulumbu stuck out a leg and sent Shaw tumbling.

Lambert, who scored the winner against Scotland with his first touch in an England shirt on Wednesday, drilled the spot-kick past Foster to cap a wonderful week.

"I think it was (a harsh) result. We struggled to get into it in the first half but I think we had better control after the interval.

"The fans will be disappointed with me and the team.

"I'll think about that (making new signings) more on Sunday. Today is all about disappointment."

On the decision to award a penalty:

"I've seen it. There's no doubt in my mind, it's a very soft decision."

"We actually scored a goal before (the penalty) that wasn't allowed to stand and that was a legitimate goal.

"But I think in the overall reading of the game, we were superior to West Brom.

"You always have to believe you are going to win, through to the last whistle, and because of that I want to congratulate my team.

"Even in the second half, when West Brom were pressing us quite hard, my team showed the resolve to keep it at 0-0 and we were able to get that winning goal in the end."