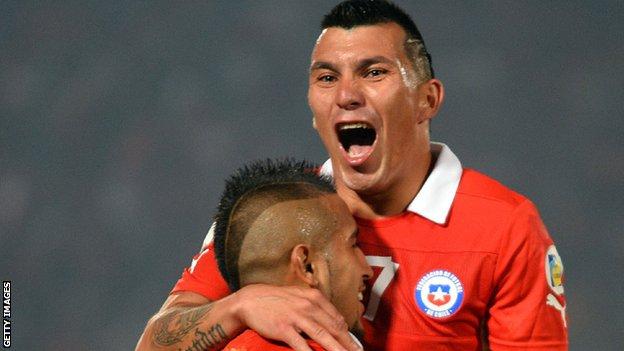 Cardiff City have broken their transfer record after completing the signing of midfielder Gary Medel from Sevilla.

The 26-year-old Chile international has joined Cardiff on a four-year deal, subject to his gaining a work permit.

Medel was at Cardiff's friendly against Athletic Bilbao on Saturday.

Earlier in the day reports from Spain had suggested a bid of 13 million euros (£11m) had been accepted by the Spanish club for the Chile international.

A tough tackler, nicknamed "pitbull", Medel was sent off three times in 31 appearances last season and has been dismissed seven times in 90 appearances for Sevilla since joining from Boca Juniors in 2011.

"Having had two seasons of regular football in La Liga, with 60-odd international caps to his name and three appearances at a World Cup, his experience will be an invaluable asset to our squad," Mackay added.

"He's played in a number of Boca v River Plate derbies in Argentina - one of the world's biggest derby matches.

"I've no doubt that his background and pedigree will complement our midfield group in the Premier League."

He has also earned plaudits for a series of impressive man-marking displays against Barcelona's Lionel Messi.

The signing of Medel is the third time this summer manager Mackay has broken the club's transfer record.

However Mackay has missed out on a number of other targets during the summer.

High-profile bids for Blackpool's Tom Ince and Toulouse midfielder Etienne Capoue both failed despite their clubs agreeing fees with the Bluebirds.