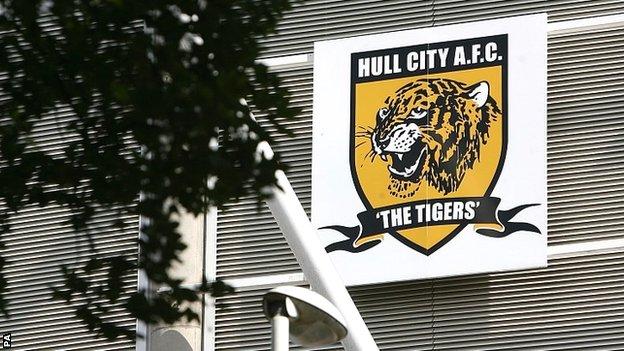 The "Association Football Club" part of the Yorkshire club's name, which has been in effect since their formation in 1904, will be scrapped.

Any references to AFC on club branding will be phased out, but will remain on the shirt crest during their first season back in the Premier League.

Allam wants to market the club as Hull City Tigers locally and Hull Tigers to national and international audiences.

"There is no doubt that many football fans in East Yorkshire are immensely unhappy with the proposed name change but they cannot have been entirely surprised.

"In recent weeks the sign above the club office changed to Hull City Tigers and a recent picture of new signing Yannick Sagbo saw him in front of a logo bearing the same words.

"The issue which has irritated many supporters is what they see as a lack of consultation by the club owners, the Allam family."

He told the Hull Daily Mail: "In the commercial world, the shorter the name, the better. The more it can spread quickly.

"My dislike for the word 'City' is because it is common. I want the club to be special.

"It is about identity. 'City' is a lousy identity. Hull City Association Football Club is so long."

Egypt-born Allam, who moved to Hull in 1968 to study and has since set up a multi-million pound company in nearby Melton, took charge of the club in December 2010.

"I have always used short names in business. It gives you power in the science in marketing. The shorter, the more powerful the message. In Tigers, we have a really strong brand."

Allam's son and vice-chairman, Ehab Allam defended the move to drop AFC from the club's name after 109 years.

"AFC is redundant, it is not used by the club. The fans never mention AFC, nor do the media," he said.

The club issued a statement to clarify the situation, which began: "The business name at Companies House had its 'Association Football Club' suffix removed in the spring of this year, leaving the club to be named 'Hull City Tigers Ltd'.

"This will now be used in official club statements, regarding any of our commercial operations.

"The Tigers brand, with its powerful imagery, will be used in international markets to attract new interest and attention in both Hull and the East Riding from a worldwide audience.

Formed in 1904, they first wore black and amber shirts for their maiden Football League campaign the following year. They moved to present ground, shared with Hull FC rugby league club, in 2002, after 56 years at Boothferry Park.

"As has always been the case, supporters remain free to refer to the club as they wish, whether that be Hull City, City, Tigers, Black and Amber, or indeed any other variant of the club's name. For many, the club will continue to be known as Hull City, as it has been from its inception.

"A new badge, to be used from the 2014-15 season, will be designed and created in consultation with fans over the coming months."

Bernard Noble of the Hull City Official Supporters' Club admitted he had mixed feelings about the decision.

"My personal opinion is I'm disappointed because I'm a bit of a traditionalist," he told BBC Radio 5 live.

"As far as Hull City Tigers is concerned, the fans - the 25,000 people who will be there for the first home game against Norwich - they'll say 'I'm off down to watch City'."

Managing director Nick Thompson, meanwhile, urged supporters "to judge it in the fullness of time".