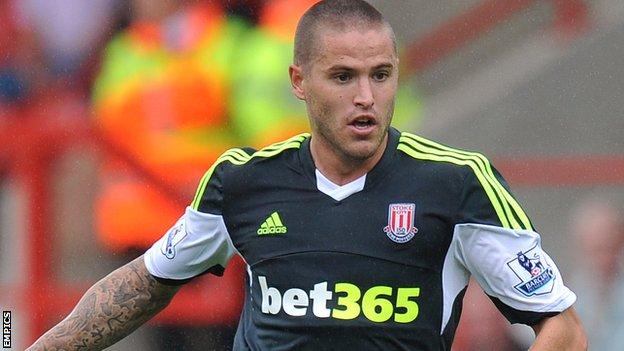 Michael Kightly says he is thrilled at the prospect of working with manager Sean Dyche again at Burnley.

The 27-year-old winger, who on deadline day, played under Dyche at Watford.

"I felt like knew how to get the best out of me and he was the main reason for me wanting to come here," he told BBC Radio Lancashire.

"I know how he likes to work, I like what the does on the training pitch and the way he likes to play."

Kightly had just returned from a long injury absence at the time of his and impressed during his two months with the Hornets, scoring three goals in 12 games.

followed in the summer of 2012, but after 26 appearances for the Potters last term, he has been allowed to leave on a temporary basis by new boss Mark Hughes.

The England Under-21 international was aware of interest from the Clarets, who lie third in the Championship, but admitted he was caught out by the speed of his move to Turf Moor and only completed a deal about three minutes before last Monday's 23:00 BST deadline following a hectic dash to find a scanner.

"I wasn't expecting anything on deadline day," he revealed. "I was sitting at home in my shorts and t-shirt, and then I got a phone call from my agent telling me he was hoping the deal would go through.

"I had to fly around to my partner's aunt and uncle's because they had a scanner. The contract got sent over on email, she scanned it off and we sent it back, but it was a bit tight."

Kightly was part of the Wolves squad that won the Championship title in 2009, along with three of his new Burnley team-mates, and he is confident Dyche's side can mount a challenge for promotion after an

"Jason Shackell, Sam Vokes and David Jones were in that dressing room [at Wolves] so there's experience there, and I'm sure there are others that have had a taste of promotion seasons," he added.

"There's definitely enough experience and quality in there, so hopefully I can add to that and help the team progress."