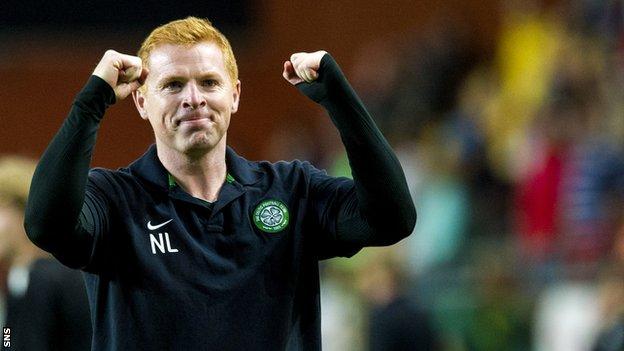 Manager Neil Lennon will be busy seeking new recruits after reaching the Champions League play-off round.

Lennon was delighted as a 0-0 draw away to Elfsborg completed a 1-0 aggregate win but he wants replacements to cover the departures of key players.

"We are going to work hard to get a few players in, the players are running on empty," he said.

"These qualifiers are tough and we have two games to go before the group stages."

Gary Hooper, top scorer at Celtic for three seasons in a row, was sold to Norwich, while powerful midfielder Victor Wanyama joined Southampton for £12.5m.

And Lennon has revealed that central defender Kelvin Wilson is close to a return to Nottingham Forest.

Celtic's potential opponents in the next round

Of the summer signings already made at Celtic Park, only former Ajax winger Derk Boerrigter has top level experience.

The draw for the play-off takes place on Friday, with Celtic seeded, and they will face either Austria Vienna (Austria), Maribor (Slovenia), Shakhtyor Karaganda (Kazakhstan), Ludogorets Razgrad (Bulgaria) or Legia Warsaw (Poland).

Of the scrappy draw in Sweden, played on an artificial surface, Lennon said: "It was a huge result.

"It is nerve wracking at this time. I was nervous all day.

"It was a tough night, we showed great character.

"It was a tough game and you have to give credit to Elfsborg, they gave it everything."

Georgios Samaras could have doubled Celtic's aggregate lead with an unmarked header in the 12th minute, while Joe Ledley was denied by an impressive save soon after.

"I felt we should have had the tie wrapped up after 20 minutes," added Lennon.

"You would expect Samaras to score or get it on target anyway and then their goalkeeper has made a fantastic save from Joe Ledley.

"We only needed the one goal to burst the enthusiasm of Elfsborg.

"We became a bit scrappy but with a bit more quality we might have picked them off near the end.

"My back four were wonderful and we restricted Elfsborg to minimal chances."