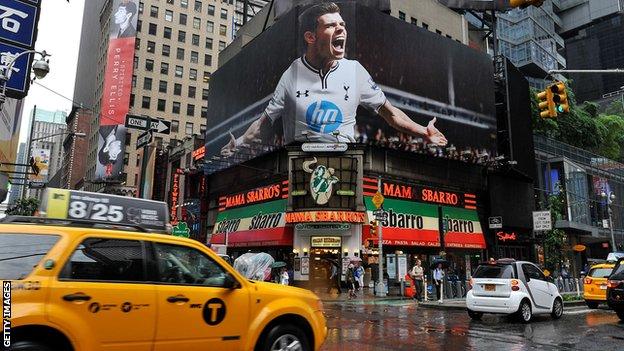 Gareth Bale's life will never be the same again.

From this moment on, he will be known as the 100m euro man. When he arrives in Madrid he will be accompanied to the Bernabeu by police outriders, pursuing paparazzi and passionate fans - the 11th galactico in the white number 11 shirt. His every appearance will bring with it a weight of expectation.

His feet are firmly on the ground, he hasn't forgotten where he came from

He will be feted and vilified, his life will come under the microscope like never before. But none of whatever triumph, disaster, heartache and adulation he faces in Madrid will be allowed to go to his head.

That is because Bale does not fit the stereotype of the world's most expensive footballer. He does not drink alcohol, he is scared of spiders and he visits his mum in south Wales when he gets time off. The boy from north Cardiff has never found it hard to stay grounded.

Those closest to him describe him as beguilingly modest, polite and normal. His girlfriend, Emma Rhys-Jones, is his childhood sweetheart and most of his closest friends are from his schooldays. In public, he is understated, wary of saying anything that might be deemed boastful. No-one, it seems, has a bad word to say about him.

That is not to say that Bale does not have a mischievous side. In the dressing room, he is the life and soul of the party, dishing out the banter and repartee. But when the subject turns to football, his friends talk of his pure love of the game above all else.

As a young boy in south Wales, he would drag his father Frank off the sofa when he got back from work and across to the park for yet another kick-around.

"Literally, from the age of three, all I thought about was football," he once said. "I never wanted to do anything else and when people said, 'what will you do if you don't make it as a footballer?' I couldn't answer because I'd never thought of doing anything else."

Who is Gareth Bale?

Bale was always an exceptional athlete. As a schoolboy at Whitchurch High School in Cardiff, he could run the 100m in 11.4 seconds. But he was an all-rounder, playing rugby and hockey and representing south Wales at cross-country while also competing at 400m, 800m and 1500m, setting an impressive personal best of four minutes eight seconds in the latter.

His father, a retired school caretaker, is and always will be Bale's hero and the greatest influence on his life. His uncle, Chris Pike, provided the footballing pedigree having played for Cardiff City.

At the age of nine, Bale was spotted by Gareth Hale, a Southampton scout, while playing at a five-a-side tournament in Newport with his team, Cardiff Civil Service. Hale approached Bale's father and invited Gareth for a trial. It was to be the start of a nine-year association with the club.

As a boy, Bale was skinny and shy. His bones grew too quickly for his body weight and that brought persistent back problems. It stopped him playing for long enough to place doubt in the mind of those in charge at Southampton Academy, who almost decided not to award Bale a full-time scholarship. He was 'borderline'.

Huw Jennings, now academy director at Fulham, oversaw Bale's development at Southampton. "It was touch and go for a while," he said. "It wouldn't have been the finest moment of my career if I had let Gareth Bale go. There but for the grace of God go all of us. But it's absolutely terrific to see his development."

Bale's training regime involved Mondays, Tuesdays and Saturdays in Southampton and Wednesday evening at the club's satellite academy in Bath, a two-hour round-trip from Cardiff. That meant he did not go to school for the first two days of the week, but he still found a way to get six GCSEs, with one A grade - in PE, of course.

He makes things look easy. His pace is frightening, his acceleration is unbelievable because he has the ability to go through the gears in little space

"He was always a fantastic personality. His mum and dad were very, very supportive," said Gwyn Morris, his PE teacher. "He had the full package - the ability and the right attitude. He's still very humble and that's a very strong part of his personality.

"His feet are firmly on the ground and he hasn't forgotten where he has come from. When he comes on holiday, he comes home to Cardiff. He is a huge global star in footballing terms and he will be an inspiration to kids everywhere."

In one of the long corridors at Whitchurch High School, there is a wall of fame, one that carries the images of those sporting stars who have come through the school. Geraint Thomas, the Olympic gold medallist and Tour de France cyclist, is there. A little further along, you find Elliot Kear, the Wales and Bradford Bulls rugby league star.

But it is one particular spot that stops you in your tracks. Bale, a toothy grin on his face, next to Sam Warburton, captain of Wales and the British and Irish Lions.

"The school is immensely proud of them, but we are proud of all our students who have achieved their potential," Morris says.

At school, Bale stood out, even in a year group that boasted 10 schoolboy internationals. He was so good that his teachers banned him from using his left-foot. "I tried to get him to use his right foot and let the other kids have a go as well," Morris adds.

Fittingly, his final game ended with a trophy, as Whitchurch beat Llanishen High School to win the under-18 Cardiff & Vale Cup. Bale stole the show as a 16-year-old. "He was a step above anybody else," says Morris. "The other boys just said he's something special."

Four days after his final exam, Bale left home for Southampton. He shared a house with Theo Walcott, and pranks were commonplace. Julia Upson, their landlady, has fond memories of the boys. "Theo and Gareth? Always polite, always well-mannered," she said recently.

"They haven't changed at all. They both liked jokes - things like putting water on the top of the doors and knocking on doors at night and running off. Nothing major."

Bale has been labelled 'The 11th galactico'

Bale developed quickly. In 2006, he played for Wales at Under-17, Under-19 and Under-21 level. Then, at the age of 16 years and 315 days, he made his senior debut for the Wales national team in a 2-1 victory over Trinidad & Tobago. He faced Brazil in only his second full international. It was a truly meteoric rise.

Sir Alex Ferguson, among many others, began to take notice. Arsenal manager Arsene Wenger chose Walcott ahead of the young Welshman, leaving Spurs to move quickly to snap up the then 17-year-old for an initial £5m, rising to £10m.

His Premier League debut came in a 1-0 defeat by Manchester United.

For Bale, it was the start of an unwanted Premier League record: the longest run of games by any player without being on the winning side - 24 appearances, over more than two seasons.

It became regarded as a jinx: if Bale was in the side, Spurs did not win. He was finally released from the curse when then manager Harry Redknapp brought him on as a substitute for the last five minutes of a match against Burnley at the beginning of the 2009-10 season, with Spurs already 4-0 up.

From that moment, Bale moved through the gears. Redknapp would later reveal the reason for that transformation. "When I first came to Spurs, Bale was still a baby and always seemed to be limping off the training ground every time he got touched," Redknapp said.

"He realised he had to be tougher if he was going to make it in the game and he has done that. Have I had to talk to Bale about mental toughness? A bit, yeah. I just said, 'stop messing about with your barnet.' He was always at it."

The world began to take notice when he scored a stunning second-half hat-trick in Tottenham's 4-3 Champions League defeat by Inter Milan at the San Siro in 2010. When the then 21-year-old was told to take a holiday by Redknapp, he did not book a trip to a seven-star resort in Dubai, but went home to see his mum, Debbie.

"It was lovely," she said. "It was brilliant to have him home. I just cannot believe all the attention. I understand it, but to me he is just a young kid who wants to play football."

It was then that rumours began of a possible transfer to one of Europe's biggest clubs. Bale unwittingly added fuel to the fire when he spoke warmly about Real Madrid before Tottenham's match at the Bernabeu in the 2011 Champions League quarter-final.

"I'm not afraid to leave the country," Bale said at the time. "I left home at 15. If I leave the Premier League, I'll learn another language... I will grow as a person."

Those closest to him say Bale always wanted more for himself, to live out his dreams. Mindful that Wales might struggle to qualify for major tournaments, he dreamed of playing for a club that could compete at the very top of club football - the opportunity to experience the majesty and allure of Real Madrid captured his imagination.

Like Bale in full flow, Real have kept coming - unrelenting, unstoppable. And ultimately they got their man.

The Welshman is viewed as the next icon at a club who have always prided themselves on attracting the greatest talents in the game. He will find his name splashed across a million replica shirts, he will become a one-man brand, a commercial superpower Real will aim to harness and exploit.

Bale has now moved into a different stratosphere, but despite all that the boyo wonder will keep his feet firmly on the ground.