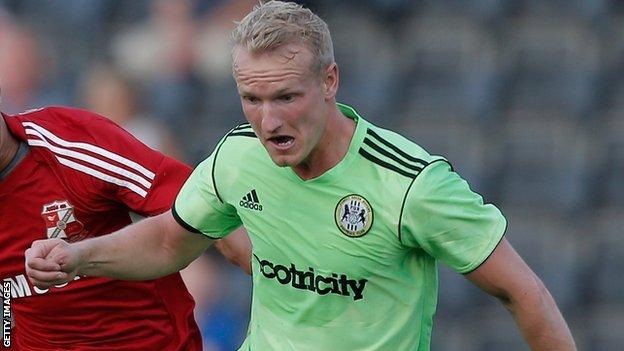 Josh Brizell was sent off for the visitors after 19 minutes for a challenge on Al Bangura and Rovers dominated proceedings.

Goals from Danny Wright, James Norwood and two from debutant Marcus Kelly gave them a 4-0 lead at the break.

Taylor netted his second before Matthew Barnes-Homer made it 7-0 and Kelly completed his hat-trick.

Midfielder Kelly, who signed for Rovers after turning down a new deal at Tamworth, struck twice in five minutes before the half-hour mark - the first a powerful drive from 20 yards followed up with a low finish from inside the area.

Wright, also making his debut, slotted in a third after 33 minutes and Norwood headed a fourth before half time.

Taylor tapped in a fifth and newcomer Barnes-Homer's placed effort made it six, before Taylor headed his second.

Kelly completed his hat-trick with 15 minutes to spare with a close-range finish.

It was a nightmare debut for Hyde full-back Adam Blakeman, who completed a move to the Tigers prior to their opening game of the season.

"I'm absolutely delighted to get three points and to get the goals we've got in the first game.

"There was a lot of quality today and that's a great start to the season, I don't think I've ever won a game on the first day of the season, so hopefully that's a good omen."