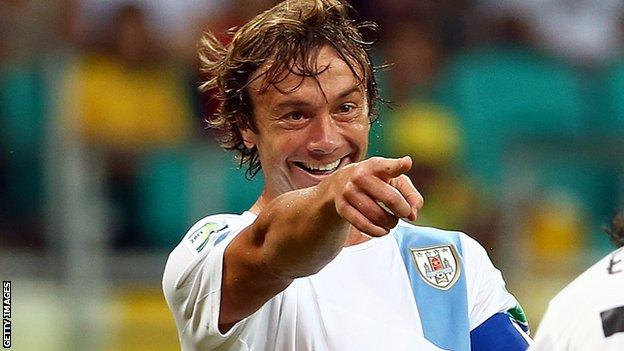 The 32-year-old, who spent part of last season on loan at Malaga, moves to the Baggies on a free transfer.

"I am very pleased to join West Bromwich Albion for the next two years," he said on Twitter.

Lugano, who joined Paris St-Germain in 2011, has played 85 times for his country and captained them a record 77 times.

"I'm doing something that has been missing in my career, playing in the Premier League, without doubt the most beautiful and competitive league in the world," Lugano added.

"The challenge is to match what West Bromwich achieved last season and trying to go a step further to reach European competitions."

West Brom boss Steve Clarke said: "He captains his country, is a leader and has real hunger and ambition to play and succeed in Premier League.

"He's an experienced centre-half who will increase competition in that area of the team.

"This is a tough league. You need as many good players in your squad as you can get - and Diego is undoubtedly one of those."

Lugano, who began his career with Nacional in his homeland before moving to Sao Paulo in Brazil, has played in Europe since joining Fenerbahce in 2006. His time in Paris was plagued by injuries.

"Paris St-Germain thanks Lugano for the professionalism he has shown throughout his contract and wishes him well in the English league," the club said in a statement.