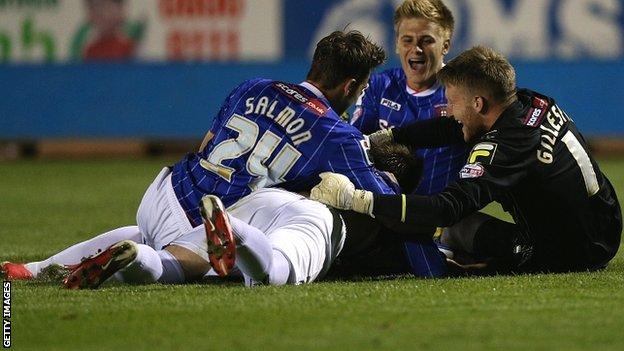 League One Carlisle held their nerve to knock Blackburn out of the League Cup on penalties at a raucous Brunton Park.

David Amoo scored for Carlisle, before Tom Cairney and Chris Taylor struck either side of David Dunn's missed penalty as Rovers went 2-1 in front.

Lewis Guy levelled to take the game to extra time, but Alan Judge put Rovers ahead again before Cairney was shown a second yellow for dissent.

Carlisle's victory was the only upset on an evening in which Leeds and saw off lower-league opposition in Chesterfield and Fleetwood respectively.

Blackburn can have little to complain about though after being undone by a performance full of fighting spirit.

Former Liverpool striker Amoo, recruited as a free agent in the summer, was a powerful presence in attack and directed a muscular header past Simon Eastwood with just 14 minutes on the clock.

Cairney's leveller owed a great deal to a large deflection which took his speculative effort past Carlisle goalkeeper Mark Gillespie.

The keeper spread himself well two minutes later to push away Dunn's effort from the spot after Danny Livesey's foul, but could do nothing about Taylor's towering far-post header.

Urged on by the home fans, Carlisle soon struck back with Guy bundling the ball over the line from Mark Beck's teasing cross.

Judge's goal might have killed off manager Greg Abbott's side, but Cairney reacted to one of the referee's decisions and picked up his second booking, giving Carlisle a numerical advantage which Amoo made tell with a well-taken finish.

Rovers led briefly in the shoot-out after Alex Salmon missed Carlisle's first attempt, but for a third time the hosts fought back with teenager Symington keeping his cool to punish Chris Taylor and Josh Morris's misses.

Carlisle manager Greg Abbott: "That is what the cup is all about. We have got a lot of kids and we know what they can and can't do, but against Rovers they were fantastic.

"Blackburn have got some terrific players, but our guys can cope if they have got a chance of getting something out of it at the end and that is what happened."

Blackburn manager Gary Bowyer: "We are disappointed, I was pleased with how we passed it about but we have undone ourselves with two poor bits of defending.

"It is a young team and they are learning, but they will have to learn quicker than that. How many times did we lead, even in the penalty shoot-out? We have to dust ourselves off."