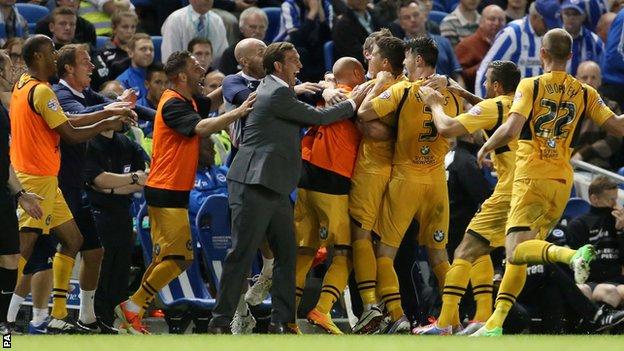 League Two Newport County marked their return to the League Cup after a 25-year exile with a shock extra-time win over Championship outfit Brighton.

The Seagulls led 1-0 through Ashley Barnes's 17th-minute strike but Inigo Calderon was sent off in the 67th minute for a foul on Byron Anthony.

Substitute Danny Crow took the game into extra time with a glancing header.

This is only Newport's third season as a full-time outfit. They have slowly climbed the English pyramid since reforming in 1989 after the original club folded amid financial ruin a year after relegation from the Football League.

He then added a spectacular second before Conor Washington scored a third to seal victory.

It completed a memorable night for League Two clubs, with Accrington and Morecambe shocking Middlesbrough and Wolves respectively, while League One Stevenage knocked out Championship side Ipswich.

All four teams will take their place in Thursday's second-round draw, and a plum tie would be just reward for a Newport side who were playing only their second competitive match as a Football League team after 25 years in the non-league ranks.

County were relegated from the league in 1988 and folded with debts of £330,000 in 1989 before reforming in their current guise later the same year.

They finally won promotion back to the fourth tier in May and won their opening League Two game on Saturday - beating Accrington 4-1 at Rodney Parade - but Tuesday's match looked like a much tougher task against a side that lost only three times at home last season.

And things appeared to be going to form when, with the Welsh side sitting back, Barnes rolled the ball in from close range for Brighton after good work from Will Buckley.

The hosts were comfortably on top, with Rohan Ince and Kazenga LuaLua causing problems, but the game changed in the 67th minute when Calderon and Anthony clashed near the halfway line.

The incident resulted in a red card for the Spanish defender and saw Newport captain Anthony carried off on a stretcher with a serious leg injury.

Newport were galvanised and drew level in the 81st minute when Crow met Chapman's cross with a glancing header past Casper Ankergren in the Brighton goal.

Both sides had late chances in normal time with Barnes heading over from six yards for Brighton.

And the hosts paid dearly when Crow curled a superb shot into the top-left corner three minutes into extra time to put Newport ahead, before Washington raced clear and rounded the goalkeeper before sliding the ball into the empty net.

"I know Calde (Inigo Calderon). He went to the ball and it was a 50-50 challenge. It was unlucky for the Newport player. We have seen the video and we can see the action of Calde was legal.

"We had many, many chances to finish the game and win it before and they had three or four chances and they scored them all.

"I'm sorry for the fans, for the result, but I think we played really good and if you don't score it's difficult to win any game."

"We've lost one of our players tonight with a double leg break. I don't think there was any malice in it - I know there wasn't - but we're really disappointed for Byron and it takes the gloss off tonight's result really.

"I'm not particularly interested in anybody else's supporters apart from our own and the conduct of my players, but to boo a player off the pitch who's had a double leg break is ludicrous, but we won't worry about that - we won't let that take away from what was a fantastic performance and a fantastic win."