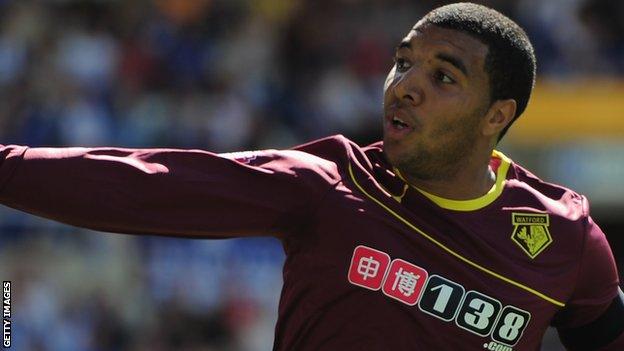 The striker finished clinically with his right foot from Fernando Forestieri's pass to give Gianfranco Zola's men the perfect season start.

Wade Elliott hit the bar for the hosts while Dan Burn had a shot saved by Hornets keeper Manuel Almunia.

Watford missed out on promotion to the Premier League last season after losing the play-off final to Crystal Palace at Wembley.

But Zola vowed his side would be stronger for the experience and they were true to his word at St Andrew's with a battling victory.

The decisive strike came on 11 minutes as Deeney played a one-two with Forestieri before racing into the box and slotting into the far bottom corner.

Blues debutant Matt Green could have levelled but, after squirming free of defenders Gabriele Angella and Lloyd Doyley, he missed the target with just Almunia to beat.

Lee Clark's side went even closer when Elliott's 25-yarder took a deflection and Almunia tipped the ball onto the crossbar.

With 10 minutes to go, and play swinging from end to end, an unmarked Kyle Bartley should have levelled but the defender's close-range header went wide.

Birmingham manager Lee Clark: "I've told the players that there is no need to change anything. On another day we would have got at least a draw.

"We didn't deserve to lose against a terrific team who will be there again at the end of the season because of the pace they play at.

"I believe we have hit the ground running and been unfortunate in terms of the result. We just didn't get that little bit of luck."

"In first half we were excellent for long spells. Perhaps we should have tried to have taken more chances and scored more than one goal.

"Birmingham came back stronger in the second half. We dropped a little bit physically and we allowed them to cause us a lot of problems."