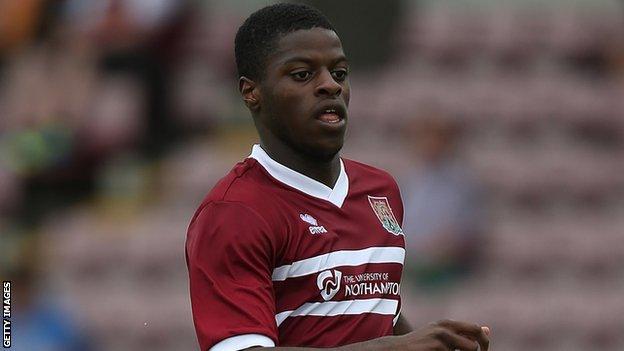 The pair have been given one-year contracts after trials at Sixfields.

Manager Aidy Boothroyd believes 6ft 1in Hooper, 19, has a lot to learn but does have genuine potential.

"JJ is a very talented individual, I expect him to be challenging for a first team place towards the end of the season," he told the club's website.

"We are giving him an opportunity to make a name for himself and to get his career going."

Deegan, 25, began his career in the Republic of Ireland playing for Shelbourne, Longford, Galway and Bohemians before joining Coventry City in 2010.

He scored five times in 43 appearances for the Sky Blues, but moved on to Hibernian in the summer of 2012, where he played 23 times before being released at the end of last season.

"Gary is a player with a good pedigree and I am pleased to have signed him," added Boothroyd.

"He will give us bite and aggression in the midfield and he is a good blend with the midfielders we already have here."