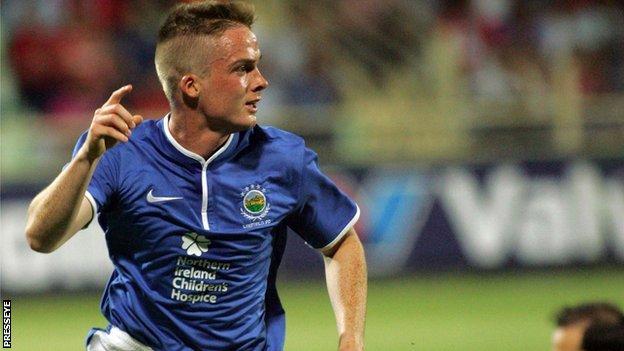 Linfield secured a famous away victory over Greek side FC Xanthi in the first leg of their Europa League second qualifying round tie on Thursday night.

Aaron Burns grabbed the winner after 25 minutes with a left-foot shot past Christian Gimenez, following good work down the left by Michael Carvill.

James Knowles had a shot deflected for a corner and Gimenez tipped a superb 25-yard shot from Carvill over the bar.

Jonny Tuffey produced a fine fingertip save to deny Marin in the second half.

Xanthi enjoyed the majority of the possession but the Irish Premiership side looked assured at the back and dealt comfortably with any threat which the Greek side posed.

Blues manager David Jeffrey said he was "ecstatic" after watching his side claim a historic victory.

"The players worked extremely hard, as did the whole playing staff in the run-up to the game.

"We are not getting carried away though - this tie is not over by a long, long way as they are a high quality full-time professional team.

"But we put in a performance of grit, determination and courage and played some fantastic football - we've created another little piece of history for Linfield FC."

The second leg will be played at Windsor Park next Thursday night.