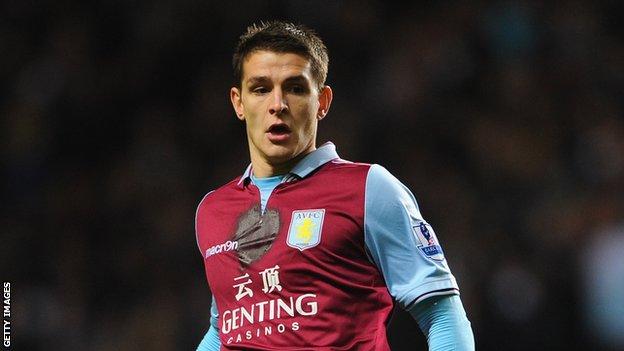 Aston Villa midfielder Ashley Westwood has agreed a new four-year contract to keep him at Villa Park until 2017.

The 23-year-old joined from Crewe 11 months ago and made 30 appearances last season as Paul Lambert's side maintained their Premier League status.

"If you look at the stats regarding his passing, they are terrific, something like a 91% success rate.

"He never seems to give the ball away. He's been exceptional," manager Lambert told the club website.

Before his move to Villa, Westwood made 138 appearances for Crewe and helped them to promotion from League Two at the end of the 2011-12 season, and although it was a big step up to the top-flight of English football, Lambert was not surprised that he adjusted so well.

"I think a lot gets overlooked with Ashley, but he has just come in here and taken to it no problem," he added.

You look at the players the manager has brought to the club, and they're all young and hungry

"He was captain at Crewe and played a lot of games in men's football before he came here so he knew what it was about."

And Westwood believes the acquisitions are a sign of the club's ambitions as they look to better their 15th-placed finish in the Premier League last season.

"You look at the players the manager has brought to the club, and they're all young and hungry," he said.

"I just want to be part of that and hopefully we're building something special here."