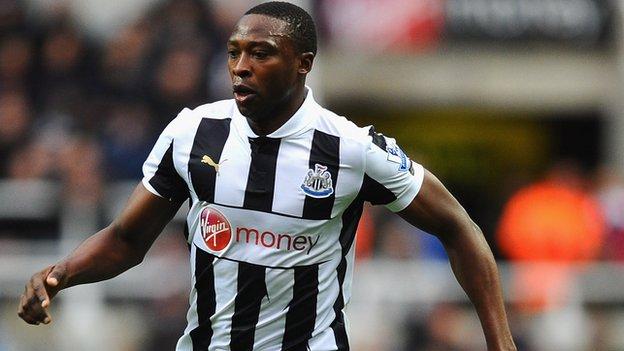 Newcastle striker Shola Ameobi has set his sights on playing for Nigeria at next year's World Cup in Brazil.

Ameobi is available again for Nigeria after the removal of a clause in his club contract that stopped him playing at the 2013 Africa Cup of Nations.

Capped only once, the 31-year-old is eager to make up for lost time.

"It would be incredible for me to represent Nigeria again. And to help them qualify for the World Cup would make it extra special," he said.

Every player is looking to play at the World Cup. I think we've got every chance of qualifying

Ameobi's sole appearance for the Super Eagles came in a 3-1 friendly win over Venezuela in Miami, Florida in November 2012 - in which he set up his side's third goal.

The former England Under-21 international had one year earlier received clearance from Fifa to switch his national allegiance to the country of his birth.

But his Nigeria career failed to take off because of an agreement with his English Premier League side - one that he confirmed to BBC Sport "is no longer in effect".

He added: "My full focus is now on helping the Super Eagles to be successful."

Nigeria coach Stephen Keshi is expected to call on Ameobi for September's World Cup qualifier at home to Malawi - the final Group F match which Nigeria must not lose if they are to secure a final play-off spot for next year's showpiece in Brazil.

Ameobi is desperate to make an impact.

"I've got to get into this incredibly talented team, make sure I give my best, show my experience and make a significant contribution," he said.

"I made my (Nigeria) debut at 31, now here I am and hopefully my experience will enable me to develop at this level.

"Every player is looking to play at the World Cup. I think we've got every chance of qualifying - but we must fight and earn the right to be there."

Before that, he could make his return when Nigeria play South Africa in the Nelson Mandela Challenge on 14 August in Durban.

Keshi's squad list for the game is expected to be made public this week.

Russia-based Obinna Nsofor is also set to return to the Super Eagles set-up for the first time in nearly two years.