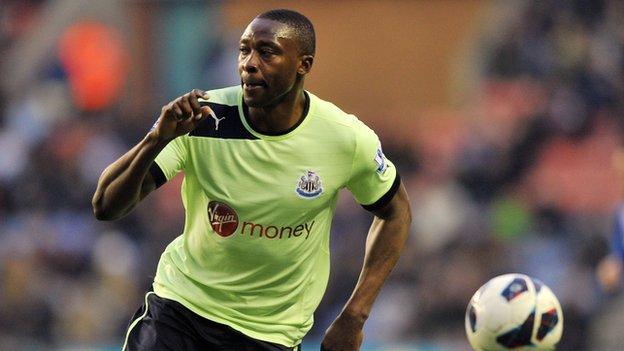 Keshi revealed that a clause in the striker's club contract which prevented him from playing at this year's Africa Cup of Nations has been removed.

"He's been dealing with this for a while and I'm happy it [the clause] has been removed," Keshi said.

"Just as we were giving up on him, he called to give us the good news."

To have someone like Ameobi available is excellent for us

The 31-year-old Ameobi has played only once for the Super Eagles, in a 3-1 friendly win over Venezuela in Miami, Florida in November 2012.

He showed his worth in that game by setting up the third goal but Keshi has been unable to call on the former England Under-21 international's services since then.

Keshi is delighted Ameobi is set to return in time for a 2014 World Cup qualifier at home to Malawi in September - a game which Nigeria must not lose if they are to secure a final play-off spot for next year's tournament in Brazil.

"I've always admired Ameobi's wealth of experience and I respect his personality - for him to make himself available is fantastic," said Keshi.

"I would love to have all my strikers available and Ameobi, Emmanuel Emenike, Brown Ideye and Victor Anichebe are all fantastic players.

"When we start selecting the squad to face Malawi, to have someone like Ameobi available is excellent for us.

"It is superb to have all these players available for our important games because it will help our quest for a World Cup ticket."

Meanwhile, Nigeria's sports minister Bolaji Abdullahi has inaugurated a six-person panel on Thursday to investigate the bonus row which almost led to the national team boycotting the Confederations Cup in Brazil in June.

The panel has been charged with determining the cause of the crisis, developing a code of conduct for players on national assignments, and making any other recommendations deemed necessary.

"We are inaugurating this panel, which we believe is immensely capable of finding a lasting solution to the issues that keep re-occurring," said Abdullahi.

"This panel will be expected to determine the immediate and remote causes of the crisis over the match bonus that happened in Namibia and make appropriate recommendations in that regard."

They have been given two weeks to submit a report on the subject.