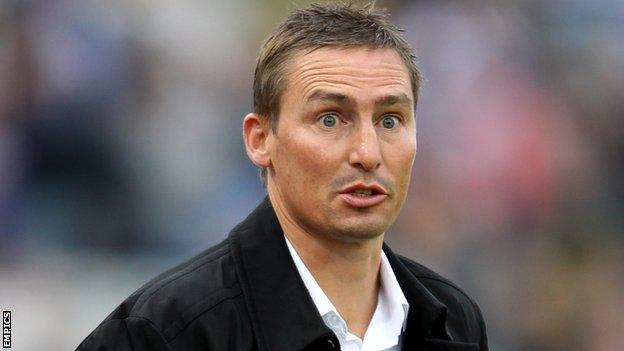 Aldershot Town manager Andy Scott believes that starting next season with a 10 point deduction could help "galvanise" his side.

The Shots' creditors recently accepted a Company Voluntary agreement which may take the club out of the administration they have been in since May.

But they will still begin the Conference Premier campaign on -10.

"Being on -10 might galvanise the squad and make sure we have to go out and win games," he told BBC Surrey.

The future of the club is still not fully secure according to joint administrator Carl Jackson, who warned the club still faces a shortfall of £50,000, despite a consortium led by Shahid Azeem having raised more than £600,000 in an attempt to save the Shots.

Even with the off-field uncertainty, Scott has begun his pre-season campaign with only two senior players on the books - Craig Reid and Craig Stanley - after the club released 13 players at the end of last season.

The 40-year-old revealed he is already in talks with triallists ahead of the club's pre-season friendly schedule, but says that it will be a challenge to keep to the strict budget he will have at his disposal.

"It's a virtual blank sheet, we can mould the team how we want," Scott added. "But it's going to be difficult because there's not a lot of money.

"It's going to be challenging because we're on -10, if we were level with everyone else, we could progress comfortably, I believe.

"From my point of view, when I came in to the club there was a lot of players who weren't."