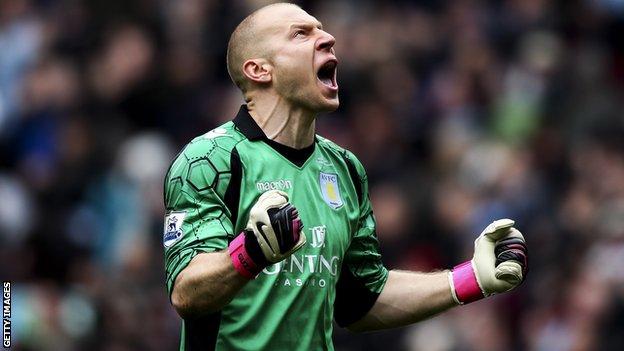 Aston Villa goalkeeper Brad Guzan has signed a new four-year contract after establishing himself as the club's first choice ahead of Shay Given.

The 28-year-old United States international made 36 Premier League starts last season and was named the club's player of the year.

"Brad's been exceptional for the club, really fantastic on and off the pitch," said Villa manager Paul Lambert.

Guzan said he was "overjoyed" to commit his long-term future to the club.

He signed for Villa in August 2008 but had made just six league appearances up until the start of last season after playing back-up to compatriot Brad Friedel and then Given.

But Guzan, who was released last summer before being re-signed, has since been promoted to first-choice since Lambert's arrival at Villa in June 2012.

Villa finished 15th in the table last season, five points above the relegation zone, and Guzan is determined to help the team improve during the 2013-14 campaign.

"This is just the start now, the start of hard work," he added.

"We have to build on last year and go forward and that is very much the collective mindset at the club."