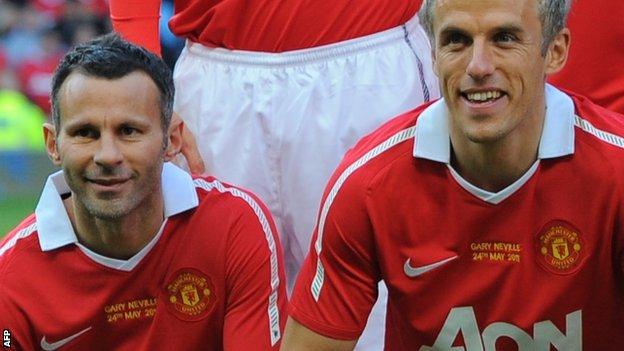 Manchester United have named Ryan Giggs as player-coach and Phil Neville as their new first-team coach.

Giggs, who will be 40 in November, and ex-United player Neville, 36, are the latest additions to new manager David Moyes's backroom team at Old Trafford.

"I'm delighted that Ryan has accepted the chance to become player-coach," said Moyes.

Giggs added: "It's no secret I've been taking my qualification. I see this as the first step in my future career."

Giggs continued: "It's a great privilege to be appointed as player-coach. I hope I will be able to bring my experience to bear, having been both a player and part of the Manchester United family for so long.

"I'm really looking forward to working alongside David and the team."

Moyes, who was announced as Sir Alex Ferguson's successor in May, will conduct his first news conference as manager of United on Friday at 16:00 BST.

Midfielder Giggs signed a new one-year contract with United in March which will run until June 2014 when he completes his 23rd season with the club.

"His success and ability to adapt his game over a number of years gives him an unrivalled perspective on the modern game," Moyes said of Giggs.

"His career is an example to any aspiring young player and I'm sure that both he and the players will benefit from his new role."

He joins the new coaching set-up which is largely comprised of people who worked under Moyes at Everton - with assistant manager Steve Round, coach Jimmy Lumsden and goalkeeping coach Chris Woods added to the Old Trafford staff earlier in the week.

Phil Neville was also a promising cricketer and in 1992, aged just 15, played for Lancashire's second XI against a Middlesex side including future England Test players Aftab Habib and Richard Johnson

Neville came through the ranks at United, played under Moyes at Goodison Park and left the club at the same time as the Scot.

He told BBC Sport in June that he was considering a career in coaching and recently worked with the England Under-21 team in Israel.

A full-back or midfielder, who earned 59 England caps during his playing career, Neville made his Premier League debut for United in 1995 in a 3-0 win over Manchester City.

He won six Premier League titles, three FA Cups and one Champions League crown at Old Trafford before joining Everton for £3.5m in 2005.

"When David [Moyes] called to give me this opportunity, I couldn't resist. I gave my all when I played for Everton but it is no secret that this club is in my heart," said Neville.