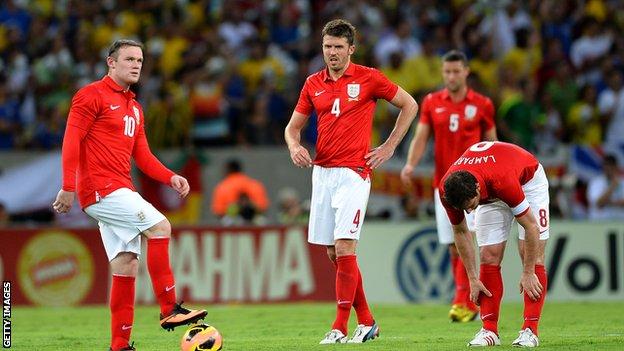 England have slipped to 15th in the latest Fifa rankings, their lowest position since failing to qualify for the 2008 European Championship.

The drop of six places means Roy Hodgson's side are now below Bosnia-Herzegovina, Ivory Coast and Greece in the world rankings.

Scotland have climbed 24 places to 50th, while Northern Ireland are up five from the June positions to 111th.

Wales are down one to 46th and Republic of Ireland drop three to 44th.

In the women's rankings, England are up one place to seventh, with Scotland up two to 21st. Wales are 37th and Northern Ireland lie 54th.

The men's Three Lions were as high as third in August 2012, but Hodgson's side picked up draws in their last two outings as they were held by Brazil and Republic of Ireland in post-season friendlies.

The last time England were 15th in the world was September 2008 after they a failed Euro qualification campaign under Steve McClaren.

Brazil have gone up 13 places to ninth following their Confederations Cup success.

Luiz Felipe Scolari's side had suffered in the rankings because they have not featured in any World Cup qualifiers this year having already secured their spot in next year's tournament as hosts.

Spain, who lost to Brazil in the Confederations Cup final, retain top ranking ahead of Germany with Colombia up four places to third.