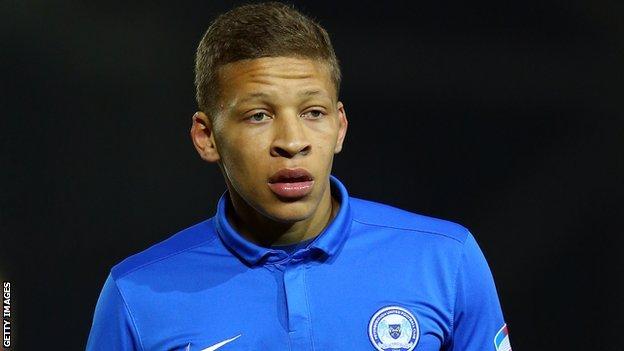 The 22-year-old scored 13 times in 29 games for Posh last season, signing a permanent deal in January following a loan from Dagenham & Redbridge.

Gayle was in the Essex Senior League with Stansted until 2011 and was on loan at Bishop's Stortford in 2011-12.

"To be playing in the Premier League from where I've come from is a big achievement," he told Palace's website.

The move to Selhurst Park caps a meteoric rise through the leagues for Gayle, who started out as a junior with Arsenal.

Having scored 57 goals in the 2010-11 season for Stansted, of the ninth tier, Gayle moved to Dagenham in League Two.

Loaned immediately out to Bishop's Stortford in Conference North, Gayle hit the net 42 times in all competitions in 2011-12.

Having signed professional terms after returning to Dagenham, Gayle was loaned to Peterborough in November 2012 before signing a four-and-a-half-year contract in a deal worth up to £750,000.

Posh were relegated despite Gayle's 13 goals in 29 games, leading United director of football Barry Fry to claim: "There has never been the interest in one single Peterborough player as there has in Dwight Gayle."

The Daggers, who added a sell-on clause in the deal when he joined Peterborough, will collect £1m of the initial fee as a result and 20% of any extra payments.