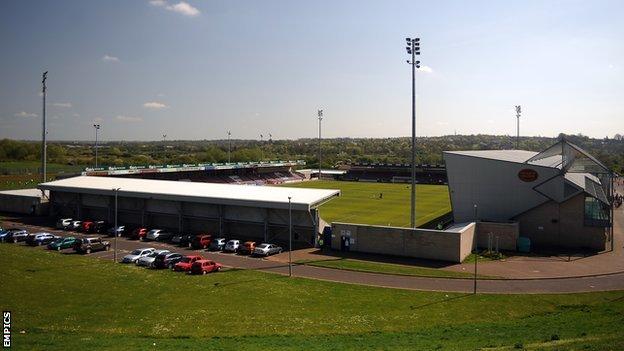 Coventry City have agreed a deal to groundshare at Northampton's Sixfields Stadium for the next three seasons, BBC Coventry & Warwickshire reports.

The Sky Blues will no longer play at the Ricoh Arena, despite an offer from the stadium's owners

The move is still subject to approval from the Football League.

What becomes of the Ricoh?

"We've been working on contingency plans.

"It is a fantastic resource and there are other people who would love to use it.

"We haven't taken those discussions forward perhaps as we could, as we've always said our first goal was Coventry City playing football in Coventry, at the Ricoh."

Northampton chairman David Cardoza said: "There's some legs in this, but it's not near done and dusted."

Talking to BBC Radio Northampton, he added: "As soon as it is or isn't, I will let everybody know.

"It's speculation at the minute, but we'll see where this goes. I'm a little bit surprised about some of the stuff that's been said."

Coventry are yet to comment on the arrangement, which is expected to be discussed by the Football League on Thursday.

The deal would see City pay the Cobblers to hire the ground, which is a 34-mile drive from the Ricoh Arena, on matchdays only.

against the club moving out of the city last week.

When both sides are scheduled to play at home on the same day, the Cobblers would have preference and Coventry would have to play on a different day - a situation which occurs for 15 of Northampton's 23 scheduled home matches.

The first fixture clash occurs on the opening day of the season - Saturday, 10 August - when the Sky Blues are set to host Bristol City and the Cobblers face Newport.

Last season, Coventry attracted an average attendance of 10,948 at the Ricoh Arena, their home for the past eight years, while Sixfields has a capacity of 7,653.

However, Northampton have agreed a £12m loan from the Borough Council to allow the club to redevelop the ground and increase capacity to around 10,000.

Coventry had been looking at options for a new stadium after being involved in a rent dispute with Ricoh owners Arena Coventry Ltd (ACL) for over a year.

The League One side said they had been looking before ACL's offer of a season rent-free.

The club have been in administration since March and, despite being they to pay creditors.

ACL director Peter Knatchbull-Hugessen told BBC Coventry & Warwickshire that he believes the future of the Sky Blues depends on their ability to negotiate a CVA with creditors.

"They have not yet satisfied the Football League that they can come out of administration in accordance with the rules of the League," he said.

"They can't have done that yet as the CVA, a 35-page document with a lot of detail, only arrived on our desk late yesterday afternoon and we're starting to pore over it.

"Now is the time the Football League will start to look at the whole picture."