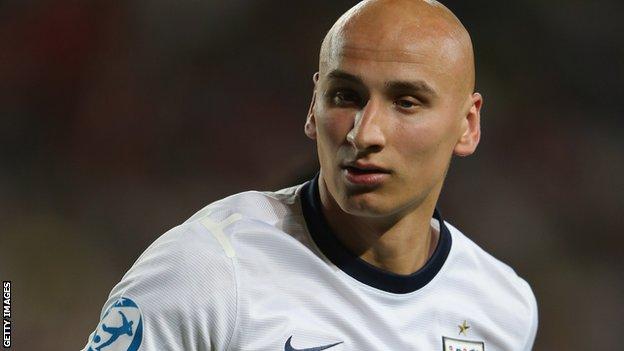 Swansea City have signed midfielder Jonjo Shelvey from Liverpool for an initial fee of £5m.

The 21-year-old, who made his England debut against San Marino in October 2012, has signed a four-year deal.

Crystal Palace, who were also linked with him, were outbid.

Shelvey, who has made only 17 Liverpool league starts since moving from Charlton Athletic in 2010, becomes Swansea's sixth permanent signing of the summer.

He paid tribute to Liverpool's fans on his Twitter account, saying: "[I] will miss the city very much. And the club! Owe a lot to everyone there! Thank you. Time to start a new chapter in life in Wales. Thank you."

Swansea will pay the fee up front, with other add-ons accounting for a further £1m.

Shelvey agreed personal terms with the club on Wednesday and will now join the rest of Swansea's squad for their pre-season tour of the Netherlands.

Having already signed three Spanish players this summer - taking their contingent to seven in the squad - chairman Huw Jenkins had spoken of the need to increase the number of British players at the club.

Teams cannot have more than 17 non-home-grown players aged over 21 in their 25-man squads and the arrival of Alejandro Pozuelo,Jose Canas and Jordi Amat takes Swansea's current non home-grown quota to 14.

"We have got to make sure that the make-up of our squad is right," Jenkins told the South Wales Evening Post.

"And obviously part of that is making sure that we have so many British players in there.

"We have got to do that - there is no choice because they are the rules."

Nonetheless, Swansea are still targeting the European market, with FC Twente's Belgian international winger Nacer Chadli the latest to be linked with the Capital One Cup holders.

According to Chadli's agent, Daniel Evrard, Swansea have made a bid for the 23-year-old.

The Swans are also in the running to sign 24-year-old Ivory Coast striker Wilfried Bony from Vitesse Arnhem and France striker Bafetimbi Gomis from Lyon.

As well as the three Spanish signings, Swansea have secured a deal to bring Dutchman Jonathan de Guzman back for another season-long loan from Villarreal.

Swansea have also brought in Gregor Zabret from Slovenian side NK Domzale and Cypriot Alex Gogic from Olympiakos on a free transfer, with both teenagers expected to go into the reserves.