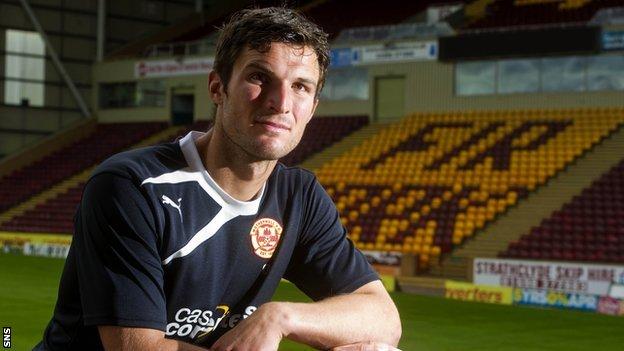 The 29-year-old refused to take a wage cut and was made redundant by Hearts.

However, Sutton has insisted he only moved on as he had been told he had no future at Tynecastle before the club entered administration.

"I think my mindset changed just after the season. I found it difficult when I got told I wasn't part of their plans anymore," he said.

"At the end of the season I was told that I was very much part of their plans.

"We all knew there was a possibility of administration, but at that point my only consideration was to stay at Hearts where I still had another year on my deal.

"A week after that my representative received a call saying that I wasn't wanted at the club anymore.

Sutton also revealed that a return to 'Well had been close prior to Hearts entering administration.

"We were fairly close to arranging a move back here before the administration and the transfer embargo hit," he said.

And Sutton added his relief that the Steelmen had continued their interest in him.

"Once the redundancy was announced at Hearts, you're hoping your phone is going to ring again and there would be a bit of interest, like there was earlier in the summer," he said.

"Fortunately there was from Motherwell and I said to my agent to deal with Motherwell, that if we could agree something there, don't worry about anyone else.

"It wasn't easy leaving Hearts, but it's nice to be back somewhere where I had nice times in the past."