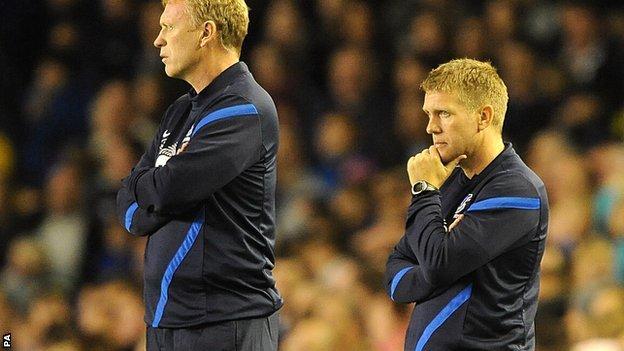 David Moyes has brought three of his Everton backroom staff to Manchester United, including the appointment of Steve Round as assistant manager.

Round, 42, joined Moyes at Everton in July 2008, replacing Alan Irvine when the Scot took over at Preston North End.

A defender in his playing days, Round made only nine appearances for Derby County before injury prematurely ended his career.

He later linked up with former Rams team-mate Steve McClaren, who appointed him to his coaching staff at Middlesbrough and then England.

Woods, 53, has been goalkeeping coach at Goodison Park since 1998 after a successful playing career where he made more than 600 club appearances and earned 43 England caps. He has also been the United States goalkeeping coach since 2011.

Moyes is also taking Lumsden with him to United, having worked with him at Preston and then Everton.

"I have worked with Steve, Chris and Jimmy for a number of years and I am delighted they have decided to join me at this great club," said the United manager.

"They bring great qualities in their respective fields and I know that, like me, they feel that this is a challenge to relish.

"I have great faith that together we can build upon the success this club has enjoyed over the many years."