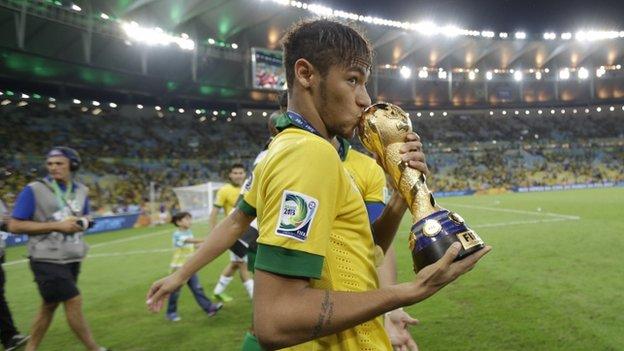 Neymar believes Brazil have won back the respect of the world after their stunning Fifa Confederations Cup win over Spain in Rio.

The 21-year-old, voted player of the tournament, produced another dazzling goal-scoring display to inspire Brazil to a famous 3-0 win over the world champions at the Maracana.

"Brazil have shown the world that the Brazil national team is back," he said.

"We showed that we deserve respect with a great win over the world's best."

Neymar said the belief of the Brazil squad had proved pivotal and that they had developed and matured during the tournament.

"We didn't hide - we ran and ran. We played very strongly from start to finish. That shows we are a strong team," he insisted.

Neymar was voted man of the match for his performance, but said he owed the award to his team-mates, adding: "I am really very happy for everything that has happened during this tournament. The award is something very special. But all 11 players should get it. Not just me."

The former Santos forward will join Barcelona in the next month and admitted he enjoyed the challenge of playing against his future team-mates.

"I have respect for them and admire them very much. But today. I was defending my country, my team-mates and my family. I had to give them a hard time. I am so happy about the way the team played - it was even better than any of us could have expected," he added.

"The Brazilians now, in tournament football, have an edge about them."

Brazil boss Luiz Felipe Scolari believes their Confederations Cup victory will give the Selecao confidence in the run-up to next year's World Cup.

Brazil, who will host the 2014 finals, clinched their third consecutive Confederations Cup title after two goals from Fred and one from Neymar.

He said: "Nobody expected such an emphatic result, not against the world champions.

"This is more than a title because we've shown that we're on the right path and that we can now take a little more confidence with us as we travel down it.

"I also want to draw attention to the support the team had off the pitch. It's a message for the whole of Brazil. We have to get along and stick together to make sure things move forward."