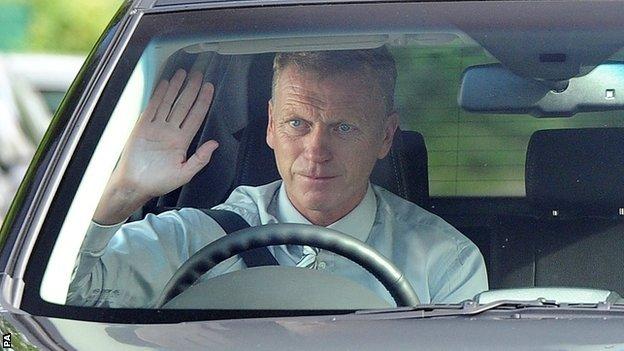 The 50-year-old left Everton to replace Sir Alex Ferguson, who retired at the end of last season after more than 26 years in charge at Old Trafford.

Moyes drove into United's training complex in south Manchester just after 08:00 BST on Monday and stopped briefly for waiting photographers.

United are one of five top-flight clubs with a new manager for next season.

The others starting new jobs are Manuel Pellegrini at Manchester City, Jose Mourinho at Chelsea, Roberto Martinez at Everton and Mark Hughes at Stoke.

One of the first issues Moyes, who signed a six-year deal, must address is the future of 27-year-old striker Wayne Rooney.

Ferguson, speaking after his final game at Old Trafford last season, claimed the England international had asked for a transfer - though the player has never officially said that.

Rooney, who also asked to leave United in October 2010, played under Moyes at Everton as a teenager before joining United in August 2004, but whether he will stay remains to be seen.

"David Moyes's only silverware is the 2000 Division Two title with Preston and he has limited European experience - but in so many respects it is not a surprise that Manchester United regarded him as the heir to Sir Alex Ferguson.

"He ends 11 years of punching above his weight at Everton to join one of the game's superpowers."

United's players - apart from those who have been on international duty - are scheduled to return on Tuesday and Wednesday before Moyes takes his first day of training on Thursday.

The Scot is expected to take a full-strength squad with him on 10 July for the first leg of their tour of the Far East and Australia.

The Chilean succeeded Roberto Mancini, who was sacked in May.