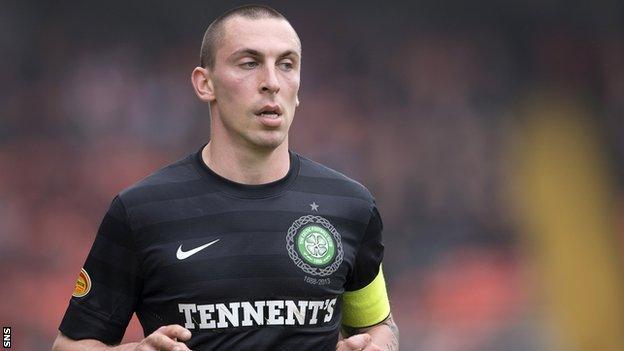 Celtic captain Scott Brown has praised the club's new signings and thinks they will have a big impact next season.

Portuguese striker Amido Balde and Dutch defender Virgil van Dijk have both arrived at Parkhead during the summer transfer window.

And Brown believes that the pair carry a physical presence that Celtic had been lacking.

"Look at the size of them! It's good to have a bit of height in the team - we've maybe missed that," he said.

"The new lads seem friendly enough, so it's good to have them in.

"They seem lively enough around the training ground."

The Scotland international also said he was hoping that striker Gary Hooper, the subject of several bids from English clubs, would stay at Celtic.

"Gary's a great player for us. I'd love Gary to stay here," he said.

"What he's done in the last two or three seasons has been incredible.

"Someone's always going to come in and have a go to buy one or two of your players because they've done so well, but it'd be great if we could hold on to everyone."

Brown also insisted he had no concerns over his fitness after returning to pre-season training after an injury-hit last season.

"I'm feeling not too bad. My body feels fine," he said, although he admitted training was at an early stage.

"I've not really done twisting and turning and passing a ball yet," he said.

And Brown also conceded he had possibly returned from injury too early last term, due to the lure of playing in the Scottish Cup final.

"I think I maybe came back a little bit early, I was maybe a bit too keen to play in the final.

"But at the end of the day I was glad to play in the final, even for 75 minutes."