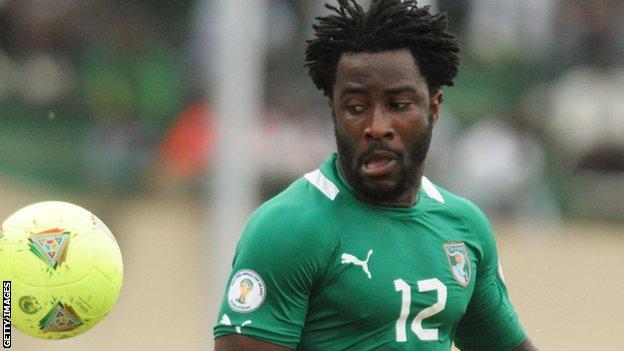 Swansea believe they are "close" to securing a deal to sign Bony from Vitesse Arnhem.

A bid of around £10m has been submitted by Swansea, but the Dutch top division side have denied reports that they have accepted the offer.

"He'll be a great signing for the club if we can get him," midfielder Britton said.

"We've heard about Bony coming. He's got a great record in Holland, last year I think it was 31 [goals] in 30 games.

"I don't think he's quite here yet but hopefully the club can pull that one off.

"It would be nice if we could get a forward who can come in and maybe get 15 to 20 goals and take a bit of the burden off Michu."

Bony has been quoted as saying he wants to join Swansea, who Vitesse say are one of a number of clubs interested in the forward.

Newcastle United and Everton are among the other clubs also reported to be interested in the 24-year-old Ivory Coast international.

The Swans are in talks to re-sign Dutch midfielder Jonathan de Guzman on a second season-long loan from Spanish club Villarreal and have recruited Jose Canas and Jordi Amat.

Midfielder Canas, 26, has joined on a free transfer from Real Betis while 21-year-old central defender Amat has joined from Espanyol on a four-year deal for £2.5m.

"We've seen last season with the Spanish boys that came in [and] the impact they made.

"We're looking forward to them coming into the team and we'll all welcome them."

Swansea are also preparing for a return to European football for the first time in 22 years when they compete in next season's Europa League.

Britton is excited by the prospect of playing in Europe but says it must not distract from the priority of the Premier League.

"It's a new experience for the football club and a lot of the players, myself included, who have not played in Europe," Britton said.

"We're going to try and give it a good go but obviously the Premier League is our bread and butter and we need to do well in that.

"It's going to be difficult playing Thursdays and Sundays and being away in countries far away.

"But I'm sure the manager and the board have come together and decided how many players we are going to need to make sure we can carry that burden and be used to it."