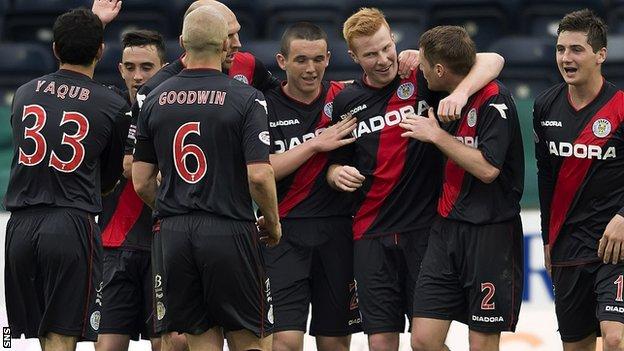 St Mirren have started pre-season training with new signing Kealan Dillon to be joined shortly by a couple of goalkeepers.

Midfielder Dillon, 19, was snapped up by manager Danny Lennon following his release from Hull City.

Lennon has an agreement in principle with two goalkeepers, with last season's first-choice Craig Samson having moved on to Kilmarnock.

And striker Lewis Guy is on trial with Carlisle this week.

"Lewis Guy is down training with Carlisle United for a few days so we'll have to see how that develops," Lennon told the Buddies' website.

"But if something can be worked out that favours all parties then everybody will get what they want which will give us more to the coffers that will allow us to go out and bring someone in.

"There is something in place to bring in goalkeepers, it is all agreed in principle so once the paperwork is all done we will confirm who they are."

Dillon, a Republic of Ireland youth international, is expected to be challenging fellow new arrival Gary Harkins for a role in next season's starting line-up.

"Kealan is more a player that we see as being a wee bit on the longer term although he isn't a million miles away from where we want him to be," added Lennon.

"We had a look at him a couple of times last season and what he showed us was great commitment on and off the pitch, and we are looking for big things from him as we look to invest in not only the immediate future but the long term future too."