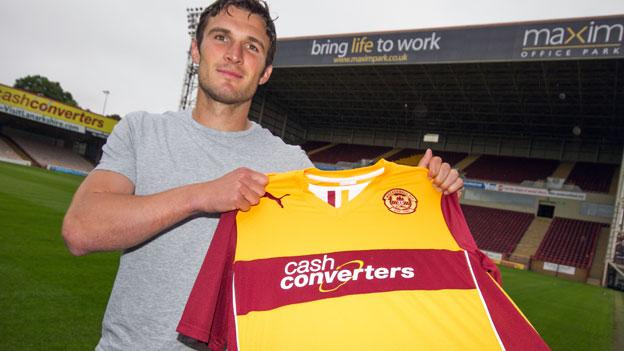 Striker John Sutton has joined Motherwell for a second time after being made redundant by administration-hit Hearts.

The 29-year-old was cut from the Tynecastle squad after refusing to accept a drop in wages.

And he has immediately agreed a two-year contract at Fir Park.

"It's good to be back, good to see some familiar faces and there's a lot to look forward to," Sutton told the Lanarkshire club's website.

Sutton played for the Steelmen between 2008 and 2011, having been recruited from St Mirren, netting 44 goals in 115 appearances.

"Most of the fans were kind to me when I left and were brilliant with me when I was here so it was a no brainer," added Sutton.

"I felt at home here last time, I enjoyed coming to work every day and I am sure that will be the case again now.

"I wasn't desperate to leave here last time and I was glad the opportunity to come back again and work with the manager and the staff who always made me feel welcome any time I returned."

Sutton is Motherwell's third signing of the summer after the arrival of Iain Vigurs and Paul Lawson from Ross County and he will wear the number nine shirt at Fir Park.

He replaces last season's top-scorer and the Scotland's player of the year Michael Higdon, who is looking for a new club under freedom of contract.