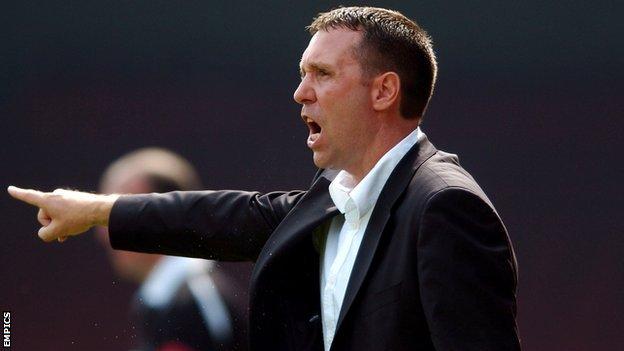 Brian Tinnion believes it was the right time to return to Bristol City, after becoming director of youth recruitment at Ashton Gate.

Tinnion, 45, played 551 games for the Robins and succeeded Danny Wilson as manager in 2004.

But he resigned as boss 16 months later, bringing to an end his 12-year association with the club.

"I've enjoyed my eight years away but I feel now it's the right time to come back," he told BBC Radio Bristol.

"The reception that I've had from local people has made it really exciting for me."

Bristol City head coach Sean O'Driscoll has overhauled his backroom staff during his six months in charge, and Tinnion was announced as the latest addition last week.

His return to Bristol comes after a spell in Spain, where he set up soccer schools in Malaga and scouted for Premier League side Everton.

"Recruiting at 13 to 21 is a really important part of a football club," continued Tinnion.

"Looking at it now, I don't think we've got it covered as well as we could have so it's a big job.

"Keith Burt [Bristol City's director of football] came to Spain and we watched some games and I felt like I had to come back.

"I knew it was right as I was genuinely excited about what I was going to do."

Tinnion took charge of 61 games as Bristol City manager but quit his position at the League One club following a 7-1 defeat by Swansea in September 2005.

But he insists: "I love this club and I gave it everything.

"I had opportunities to leave when I was playing but I stayed loyal to the club.

"I showed loyalty before and I'll show exactly the same again. I'm going to try my best to get the young players of Bristol in to the first-team team."