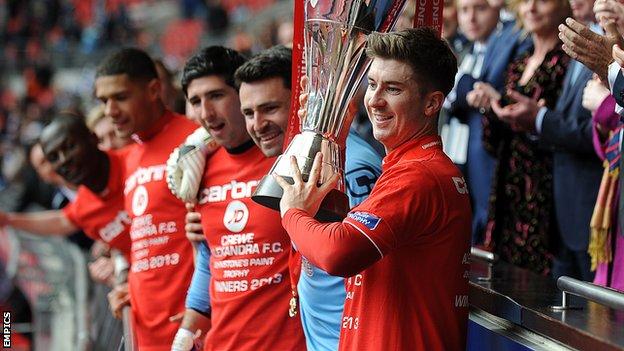 Murphy led Crewe to a mid-table finish in League One last season and also at Wembley.

It is understood the fee agreed with Blackburn is in the region of £1m.

Rovers managing director Derek Shaw told BBC Radio Lancashire: "There's a lot of activity behind the scenes at the club at the moment.

"We don't wish to confirm any speculation, but when there's something solid to report, we'll let the fans know immediately."

Crewe boss Steve Davis confirmed on Friday morning that an unnamed Championship club had made an offer, but stopped short of saying it had been accepted.

"Wolves made a bid that was acceptable to the club and they were given permission to speak with Luke and his agent.

"There has now been another bid made from an unnamed Championship club and we are in the process of looking through that," Davis told BBC Radio Stoke.

"Nothing has been accepted with that one. There has been interest in Luke but no other firm offers. If we can reach an agreement with the other club, then Luke would be free to speak to them.

"The decision would be down to the player where he went. We are doing what is in the best interest of Crewe Alexandra financially, and leaving the ultimate decision up to him."

After being named as the League One club's player of the year in April, he said he felt he was amid reports linking him with Premier League side Aston Villa.

Should he move on, Murphy's name will be added to the long list of Crewe academy graduates to leave the Cheshire club for a substantial fee.

and have both departed Gresty Road for Manchester United and Villa respectively in the past 12 months.

New Blackburn boss Gary Bowyer has made four additions to his squad ahead of the 2013-14 campaign, with Alan Judge, Simon Eastwood, Chris Taylor and Todd Kane [loan] all agreeing moves to Ewood Park.