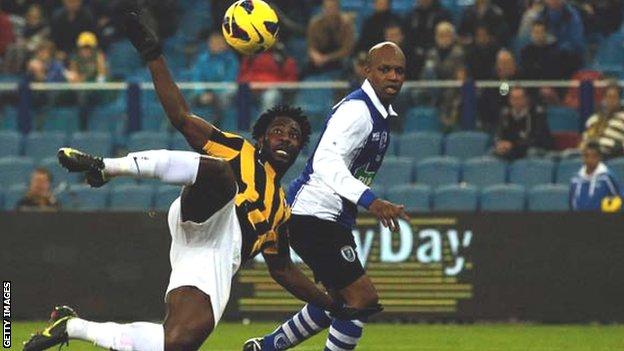 Swansea City believe they are "close" to securing a deal to sign striker Wilfried Bony from Vitesse Arnhem.

A bid of around £10m has been submitted by Swansea, but Dutch top division side Vitesse have denied reports that they have accepted the offer.

Bony, 24, has been quoted as saying he wants to join the Premier League side.

"We've put offers in in good faith to try to do the right deal we think is right for us as well," said Swansea chairman Huw Jenkins.

"In some cases we've got to wait, for a variety of reasons. We've got a great squad of players in a settled environment and we are prepared to wait for the right player.

"We're in no hurry. Yes, we've got a timescale of August to get a couple of players in and I'm sure we'll do that by then."

Bony, who has won 20 caps for Ivory Coast, scored 31 goals in 30 league appearances in the Eredivisie last season.

My relationship with [Swansea manager] Michael Laudrup has always been very good, that has never been in doubt

Vitesse say Swansea are one of a number of clubs interested in the forward.

The Swans hope Bony will become their third new signing since the end of last season, having already turned to Spain again to bolster their squad.

Real Betis midfielder Jose Canas will arrive on a free transfer, while a deal was completed this week to sign Espanyol defender Jordi Amat for £2.5m. Those two take Swansea's Spanish contingent to seven players.

Real Betis midfielder Alejandro Pozuelo has also been linked with the Premier League club, as Swansea aim to make another three signings before the start of the season.

Manager Michael Laudrup recently revealed his frustration at Swansea's transfer policy, a row that put his future at the club in doubt.

But Jenkins stressed his relationship with Laudrup has not been harmed by the public disagreement, although stressing the prudent spending policy would remain.

"Michael Laudrup has made his feelings known that he wanted to stay here and we have been looking to bring in five or six players," Jenkins said.

"We've worked hard during the last month or two with a lot of offers in for a lot of players, we are hoping to bring in one or two of those main targets, which have been publicised quite a bit but we will hopefully land them.

"My relationship with Michael Laudrup has always been very good, that has never been in doubt."

Laudrup's agent, Bayram Tutumlu, was at the heart of the unrest and the club have since cut all ties with him.

When asked about Tutumlu's role in the saga, Jenkins said: "I am not friends with any agent as such, but they are part of football and we do our best to deal with them in the right way. A lot of that [the row with Tutumlu] was blown out of proportion.

"We run our football club in a certain way and whether it is Michael Laudrup and his agent or any other manager and his agent, we will continue to run the club as we see fit, that is what we have done for the last 10 years.

"You'll have to ask the agent what his reasons were, but things are settled down looking forward to the new season."

Goldenway's GWFX brand will replace online casino firm 32Red on the front of Swansea's home and away kits for the 2013-14 season as part of an initial £2m one-year deal, with the option for an extension.

"We are delighted to have agreed a deal and we look forward to our partnership. We hope we can build up a great relationship over the next 12 months and hopefully the next few years," Jenkins added.

"It is always easy to get a sponsor when you want one, but finding the right one to suit the football club was very important."