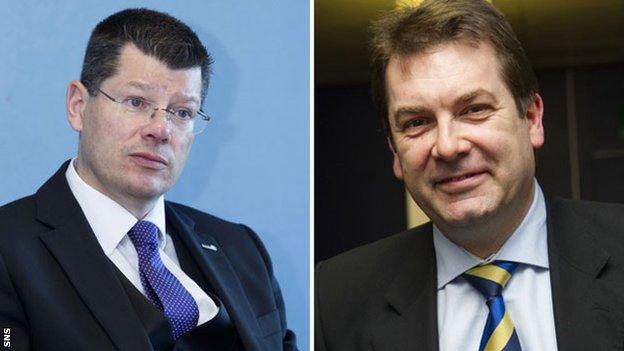 The pair, formerly head of the Scottish Premier League (SPL) and Scottish Football League (SFL) respectively, will be interviewed next week.

And the SPFL's board will decide who will spearhead the new governing body.

The organisation, a merger of the SPL and SFL, was agreed following lengthy talks at Hampden on Thursday.

The league structure will remain a top flight of 12 and three lower divisions of 10. There will be play-offs between the top and second tier leagues.

In addition, the SPFL will introduce a revised financial distribution model.

Talks at Hampden took about 15 hours, with a number of adjournments as lawyers mulled over financial details.

The formation of a new Scottish Professional Football League had looked in doubt when the SFL board requested more facts about the SPFL's finances.

But the SFL appears to have been satisfied with the response when the meeting reconvened in the evening.

More money will flow into the second tier, enabling clubs to run a full-time operation should they wish to.

The SPFL's board comprises three members from the top-tier clubs, two from the second tier and one person representing the bottom 20 clubs.

There had been dissenting voices from Second and Third Division clubs, but 23 of the 29 clubs voting backed the plan for restructuring.

Ahead of the meeting, Annan chairman Henry McClelland had said: "Today is one of significant history in the game. Everyone's saying it's for the good of the game that we move forward. We'll judge that in a few years' time, I think.

"We're going to be putting small clubs, like Annan Athletic, into financial difficulty because of this merger."

And after the meeting was adjourned, McClelland explained that he had asked for more financial information.

"We've asked for clarity on the clubs in the Second and Third Division as to what our worst-case scenario is; the best case and probably the most likely," he said before the gathering reconvened.

"That's normal in the due diligence process."

On leaving the meeting at midnight, Hibernian chairman Rod Petrie said: "All the clubs can go forward in a positive vein now.

"From the supporters' point of view, they probably don't see an awful lot of change but from the management of the game it'll streamline the way things are done and hopefully we can all get behind some new initiatives to help things on the pitch."

Stirling Albion operations director Stuart Brown said he was satisfied that there was a solution that suited all 42 clubs.

"There were some due diligence matters that had to be addressed," he said.

"The SFL board is happy that this has now all been successfully concluded and our board was happy to sign up."

Rangers chief executive Craig Mather said the "best bit of the day" was that his club now had full membership and voting rights, following its associate membership status with the SFL.

"I'm very happy," he said. "It's been interesting but we've got there. We've always been active. We continue the road and will be humble."

Dundee chief executive Scot Gardiner, pointing to the benefits of play-offs and one governing body, called it "a momentous day".

"A lot of hard work has gone into it. We are obviously delighted," he said.