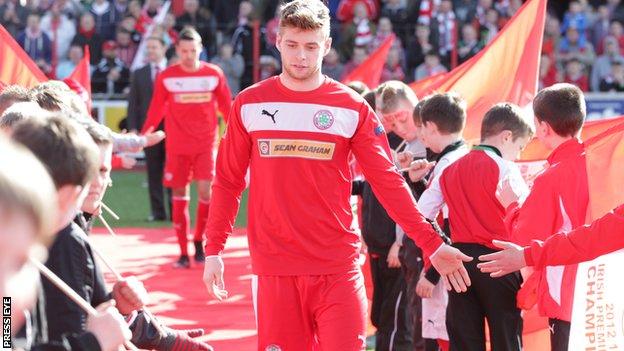 Former Cliftonville midfielder James Knowles has agreed to join Linfield for the 2013/2014 season.

The 20-year-old, who helped the Reds win the Irish Premiership title last season, only wanted a one-year deal as he has ambitions to return to England.

The capture of the ex-Blackburn Rovers player has delighted David Jeffrey.

"His attitude in pre-season has been excellent and he made it clear that he didn't want to go anywhere else but here," said the Linfield manager.

Knowles was ruled ineligible to play for Cliftonville in the Irish Cup final against Glentoran because his contract had expired.

Linfield have been linked with the 20-year-old, who was voted Northern Ireland Football Writers' Player of the Month for November, since the end of last season.

Jeffrey told the club website: "we had spoken to James after he came out of contract with Cliftonville and he is a player not just wanting to play for Linfield but who will fit into the wage structure at the club".

"He still harbours ambitions of returning to play in England and that's why there's been a little delay in terms of him signing.

"However, when we made it clear that there would come a point where we couldn't wait any longer, he decided that now was the time to sign and we're absolutely delighted to welcome him to the club.

"He is a player who in pre-season training has been most impressive, not just in terms of his level of physical fitness but also his technical ability, his touch and the tenacity of his tackling.

"He is a very versatile player but primarily, we see his strength as being in the middle of the park.

"He is very strong in the tackle but he also has an eye for a pass. We are looking for him to provide steel and creativity."

The former Northern Ireland Under-21 international will be available to play in Linfield's away Europa League first round qualifier against IF Fuglafjordur on 4 July and the return leg seven days later.